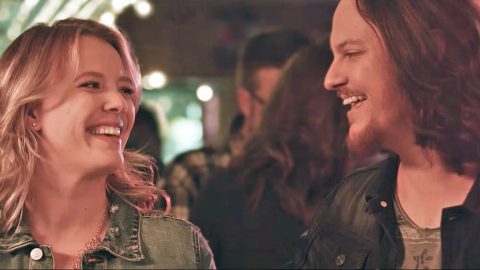 The fellas in Home Free are known worldwide for their top-notch a cappella covers of country, pop, gospel, and Christmas hits. In addition to singing covers, the group is also known for their original songs, including past favorites such as “Good Ol’ Country Harmony” and “California Country.”

Fans were able to treat their ears to a whole crop of original tunes when Home Free released their album, Timeless, in September 2017. One track that stands out in the batch is the oh-so-catchy “It Looks Good.”

The song is told through the voice of a guy who just went out to have a good time and suddenly finds himself infatuated with a girl he meets. They hit the dance floor, and the guy can’t stop thinking about how beautiful the girl is. As he sings, “Country sounds so sweet from your lips, and it looks good on your hips.”

A song this good had to have a music video to accompany it, and the Home Free guys knew it. The video for “It Looks Good” dropped just days before Valentine’s Day in 2018, and features a few special stars.

As you’ll notice while watching the video, a few of the Home Free guys can be seen smooth-talking and dancing with some lovely ladies. But they aren’t just some actresses cast for the video…they’re the guys’ real-life sweethearts!

In the video, you’ll see  Tim Foust’s wife Jenika and Rob Lundquist’s wife Kelsey. But these ladies are no strangers to appearing in Home Free’s videos!

If you’ve been a fan of the group for a while, you’ll likely recognize Jenika from her starring role in their swoon-worthy video for “Die a Happy Man.” As for Kelsey, you can pick her out in the group of friends and family members who joined Home Free for their video for “White Christmas.”

After meeting them in past videos, we’re happy to see these ladies in the video for “It Looks Good.” You’re sure to be feelin’ the love as well once you check out the video below!