By Miranda Raye on December 18, 2015
Advertisement 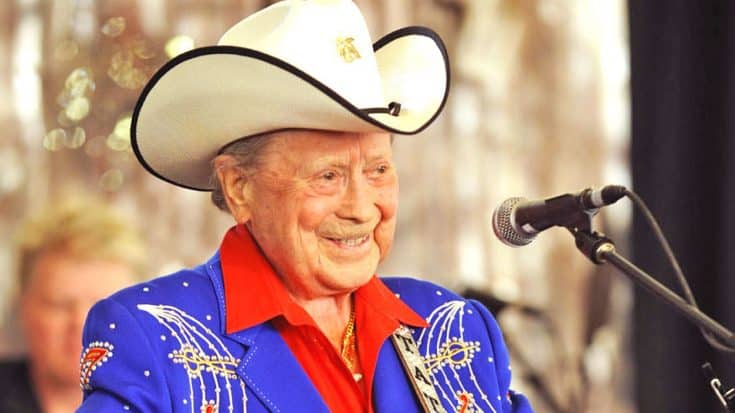 With a career spanning over three quarters of a century, there is no denying the impact that Little Jimmy Dickens had on country music.

The 4’11” singer was known for his comical novelty songs, his rhinestone-covered outfits, and his great sense of humor. Later in his career, Dickens played an active role in the careers of modern country artists. During the last few years of his life, he  became known for his humorous appearances in many of Brad Paisley‘s music videos and in 2003, Dickens was the one who invited Trace Adkins to join the Grand Ole Opry.

Dickens himself was the oldest living member of the Opry until his death on January 2, 2015.

Throughout the course of his career, Dickens was a major crowd-pleaser thanks to his fun, high-energy performances. In honor of Dickens, we’d like to pay tribute to him with thee of his most entertaining and memorable performances.

“A-Sleeping At The Foot Of The Bed”

Released in 1949 off of Dickens’ compilation album Raisin’ The Dickens, “A-Sleeping At The Foot Of The Bed” was Dickens’ biggest hit that year. The song ended up peaking at the sixth spot on the Billboard Hot Country Songs chart, and was Dickens’ fourth Top 10 hit for 1949.

In 1983, almost 40 years after the song’s release, it was still a big hit with crowds whenever Dickens performed it on stage. While performing on the show That Good Ole Nashville Music that year, Dickens decided to sing the song, much to the pleasure of the crowd.

Dickens’ performance makes it clear that he loved what he did, since the smile never disappears from his face the whole time he sings. He even lets out a little chuckle at the end, and the audience rewards his energetic performance with a warm round of applause once he finishes singing.

Another song from Dickens’ compilation album, Raisin’ The Dickens, “I’m Little, But I’m Loud” may not have ever made its way onto the charts, but the song still captures Dickens’ fun-loving spirit.

Dickens also plays on the listeners’ awareness of his short stature, making sure to place extra emphasis on the line “I’m puny, short, and little, but I’m loud!” every time he sings it.

“May The Bird Of Paradise Fly Up Your Nose”

Dickens’ most recognizable song, “May The Bird Of Paradise Fly Up Your Nose” was released in 1965 off of his studio album of the same title. The song was Dickens’ biggest success and his only number one hit, holding the top spot on the Billboard Hot Country Songs chart for two weeks and crossing over to claim the 15th spot on the pop chart.

In total, the song spent 18 weeks on the charts, and was a definite fan-favorite. A little over a month after the song’s release, Dickens’ chose to perform it during his appearance on the Bobby Lord Show.

Dickens delivers an animated performance, making goofy faces in reaction to the events happening in the song. He truly gets into the character of the song itself, which makes it an extremely entertaining performance to watch.

When Dickens finishes singing, Bobby Lord comes over to him and praises him on his performance, saying, “boy I don’t believe you sung that Jimmy!”

Dickens laughs in response, saying, “I did, and I’m glad.”

Like Dickens, we are so glad he sang “May The Bird Of Paradise Fly Up Your Nose,” as well as all of his other songs.

We still miss Dickens terribly, but after providing us with decades of fun-filled performances, it seems safe to say that his legacy will always live on in country music.