Hours After He Died, Chris Stapleton Honors Malcolm Young With “You Shook Me All Night Long” 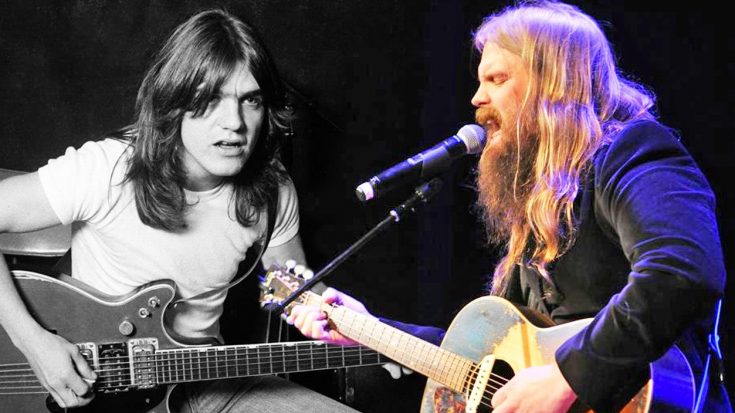 Rock legend and AC/DC co-founder Malcolm Young passed away after battling dementia at 64 years old on November 18, 2017. Fellow artists, and many of Young’s fans, paid tribute to the rocker in various forms. Most took to social media, while country star Chris Stapleton paid his respects during his concert the very next night.

Stapleton is no stranger to paying tribute to legends and icons that have passed on, fully embodying the phrase, “When words fail, music speaks.” Just a few days after Glen Campbell passed away, he played “Rhinestone Cowboy” at his concert and three days after Tom Petty’s passing, he honored the “Free Fallin’” singer with another one of his hits, “Learning To Fly.”

After the passing of Young, he changed his setlist once again and included a somber rendition of the AC/DC classic “You Shook Me All Night Long.”

“Y’all help us out with this one,” Stapleton told the crowd before playing a slowed-down introduction to the recognizable song. With the help of his opening act Brent Cobb, Stapleton had the audience singing along from the very first lyric.

During the last chorus, all Stapleton sang was, “Honey you,” and took a step back from the microphone, allowing the audience to sing the chorus, and pay their respects to the rock legend as well.

The four-time CMA Male Vocalist of the Year may have turned the song into a powerful country ballad, but at the same time, it was a perfect tribute to Young. Watch it below.