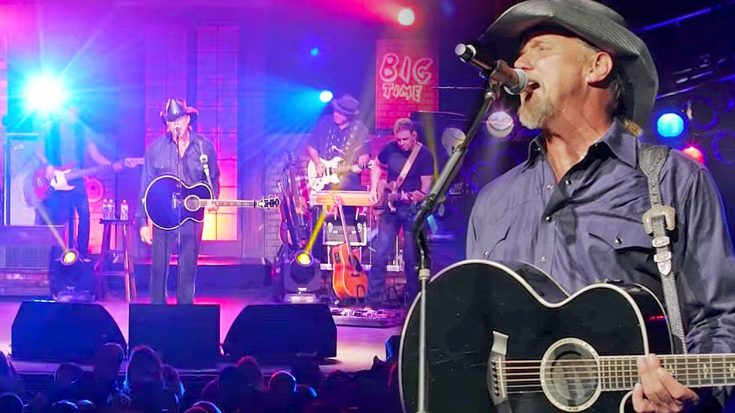 It’s hard to believe that nearly two years have passed since fans got their first taste of Trace Adkins‘ new album, Something’s Going On. That taste came in the form of the song “Jesus and Jones,” which showed a more reflective side to Adkins than anyone had ever heard before.

Released in January 2016, “Jesus and Jones” was toted as the first release off of Adkins’ then-unnamed record. The song experienced some success on the country charts, peaking at the 41st spot. That ranking makes it the most successful single Adkins has released off of Something’s Going On thus far.

Although Adkins didn’t write the song, he explained in interviews how easily he was able to connect to it. He said that he has always been either one extreme or the other, and has never been able to find the balance between the “Jesus and Jones” sides of his life.

“So you have this kind of struggle there internally between those two things,” he said. “Sometimes I’m a good boy, sometimes I’m not.”

Fans responded warmly to Adkins release of the song, hence the reason why it climbed into the Top 50 on the country chart. It has also been a crowd favorite since he introduced it into his set. As good as “Jesus and Jones” is on the record, you really have to hear Adkins sing it live to have a full appreciation for it.

In June 2016, Adkins uploaded a video of him performing “Jesus and Jones” live at the Paramount Theater. Adkins was a commanding presence on the stage as he briefly explained to the packed house how he’s “stuck somewhere between Jesus and Jones.”

Adkins brought a boatload of raw energy to his performance of the song, which translates in both his voice and facial expressions. By watching him sing the song live, you can feel just how strong his passion is for it and the struggle it describes.

Tune in below to check out Adkins’ remarkable live performance of “Jesus and Jones.”

“Jesus and Jones” is truly the song that started it all for Adkins in this phase of his career. If you’d like to listen to the other tracks on Something’s Going On, be sure to download a copy of the album here!