How Did Trace Explain ‘Watered Down’ To Kix Brooks? By Referencing A Waylon Jennings Song 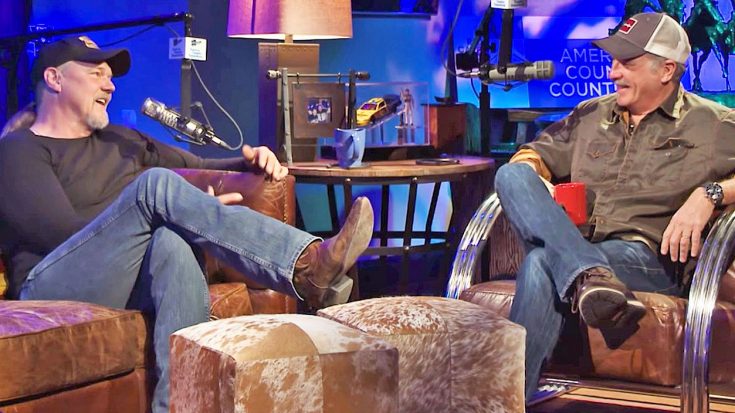 In January, Trace Adkins revealed his plan to release a new album, his first in four years. Titled Something’s Going On, Adkins announced the album would be released on March 31.

Months before his big announcement, Adkins had released two songs that later appeared as tracks on the album: “Jesus and Jones” and “Lit.” A third song was released as a single when Adkins made his announcement in January, titled “Watered Down.”

Adkins’ fans felt an instant connection to the song, which focuses on the topics of aging and slowing down life’s pace. As the narrator sings, while he still has a fire and desire to get a little wild, he now knows when he needs to put on the brakes.

Days before Something’s Going On hit the shelves, Adkins stopped to talk about his new single on Kix Brooks‘ radio show. As a member of Brooks & Dunn, Brooks’ career flourished in the 1990s and 2000s just as Adkins’ did. So he was easily able to relate to the message of slowing things down that Adkins sings about in “Watered Down.”

“It’s sort of like, turning that corner for us,” Brooks said. “As hard as it is to admit sometimes, there is a peace, and at least accepting…the fact that we’re not getting any younger, that’s for dang sure.“

Adkins agreed with what Brooks had to say, and further explained the point of “Watered Down” by comparing it to Waylon Jennings‘ number one hit from 1979:

“It’s just a reflective piece that just says, you get to a point in your life where you’ve got to temper your vices. Cause it reminded me of that old Waylon song, ‘[I] Ain’t Livin’ Long Like This,’ you know? So at some point you have to temper it a little bit.”

Adkins’ comparison to “I Ain’t Livin’ Long Like This” is spot-on. The song is about a man who suddenly realizes that he isn’t going to be around much longer if he doesn’t change his wild ways. While the realization in “Watered Down” isn’t as drastic, it runs along the same vein as the one that appears in its predecessor.

You can tune in to the video below to hear Adkins talk more about “Watered Down” in his interview with Brooks.

Once you’re done, give “Watered Down” a listen by downloading Something’s Going On here! Then tell us if it reminds you of “I Ain’t Living Long Like This!”

Always dream of catching Trace Adkins in concert? Well it’s time to make that dream come true! Trace is on tour all summer and fall, and he’s coming to a city near you! – Don’t miss your chance to see him LIVE! Tickets always sell fast for a superstar like Trace, so make sure you get yours now by clicking here!