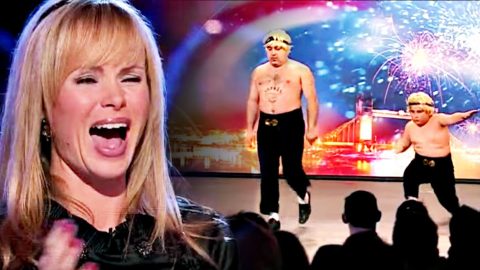 The judges could NOT stop laughing at this comical pair of father and son Irish line dancers!

Taking the stage during Britain’s Got Talent’s 2009 season of auditions, the father/son duo calling themselves Stavros Flatley wowed all three judges with their hilarious dancing antics and personalities.

Channeling their inner Irish line dancer, Stavros Flatley took to the stage in full force following their eccentric announcement that had the judges puzzled, but once they spotted dad Demi Demetriou burst out from stage right, they were doubled over in gut-busting laughter!

After rising to fame with their appearance on BGT, Demi and Lagi Demetriou have performed their gig all over the world, and in 2012 – they even got a chance to perform for the Queen of England at the 100th Annual Royal Variety Performance.

Watch this hilarious and surprising audition in the video below!