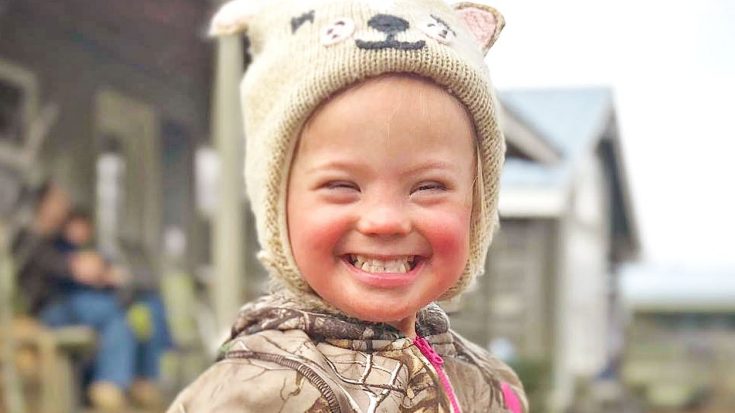 The undeniable star of Joey + Rory’s social media accounts is their daughter, Indy. From time to time, Rory will share photos and videos of Indy so fans can keep up with everything she has been up to.

Recently, Indy has been getting into a bit of innocent trouble around the house. As any of you who have children know, they have a tendency to get into things they shouldn’t, and inevitably end up making a mess.

On December 11, Rory shared a photo that showed Indy in the midst of sticky situation. As Rory explained, he is working on potty training Indy right now. She has a special potty to go in and everything, but on this particular day she was unable to make it there in time.

So what did Indy do? Well, she decided to hop inside a nearby ottoman and go potty in it instead!

…she didn’t quite make it to the potty, so she climbed in the ottoman and went. Hmmm…that’s not in my potty training book.

Apparently the bathroom is Indy’s go-to place to find some mischief. On Tuesday (December 19), Rory had another set of priceless photos to share of Indy’s latest adventure…and it was a messy one.

Somehow, Indy ended up finding an eyeliner pen in the bathroom and decided it looked like fun to draw with. But rather than drawing on paper, or the floor, or even the walls, Indy chose her face as her canvas!

Indy ended up covering the majority of her face with the black eyeliner, scribbling the most next to her mouth and on her cheeks. She was quite proud of her handiwork, because she turned to Rory with the biggest smile on her face once he caught her red-handed.

Other photos show that Indy’s face wasn’t the only surface that ended up covered in eyeliner. The tub also had some black smudges on it!

But when Rory saw how happy Indy was, we’re sure it was impossible for him to feel upset!

…”this is called face liner, and I think it goes on like this”

Indy first captured country fans’ hearts when footage from her birth was included in Joey + Rory’s video for “If I Needed You.” You can catch that video below.

Watching the video, it’s hard to believe that Indy is almost four years old now. She’s growing up before our eyes!