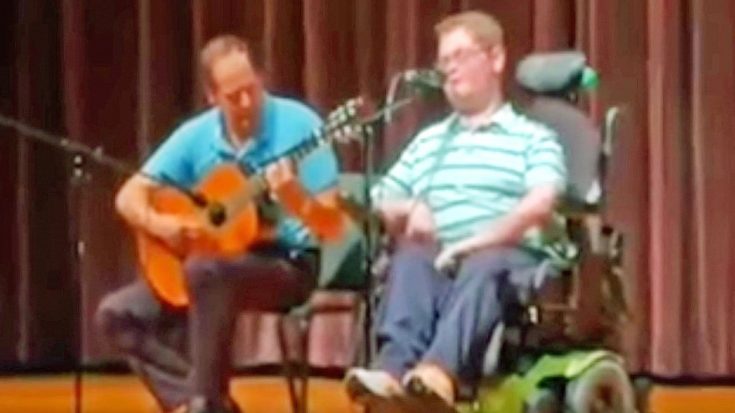 When then-16-year-old Jared Watson took to the stage at his high school’s talent show, he had no idea his life was about to change forever. Watson, who was a sophomore at Delmar High School, loves music, and dreams of one day recording an album in Nashville.

A representative for Watson and his family shared the young man’s inspiring story following his talent show debut. As the rep revealed, Watson suffers from Spinal Muscular Atrophy, which the Muscular Dystrophy Association website describes as “a genetic disease affecting the part of the nervous system that controls voluntary muscle movement.”

The rep said that Watson’s condition has robbed him of his muscle movement as he’s grown older, and that he is no longer able to walk. As a result, he is bound to his wheelchair.

But Watson isn’t going to let anything stop him from achieving his dreams. In addition to pursuing a career in Nashville, Watson would like like be an announcer for voice-overs and radio.

Watson took his first step toward sharing his vocal talent with the world when he entered his school’s talent show. With his father by his side on guitar, Watson started singing a song made famous by Randy Travis and later Carrie Underwood, “I Told You So.”

Your jaw will drop once you hear Watson start singing. His voice is strong and powerful, and his range is impressive. He can hit the lowest of low notes and the highest of high notes with ease.

But what makes the performance all the more inspiring is his obvious love for the music. You can tell how much that moment meant to him, and it shows through the genuine nature of his performance.

Watson ended up winning third place at his school talent show, and couldn’t have been happier. Speaking about the experience, he said, “I thought this was going to be an ordinary performance for me, but it turned out that this performance is changing my life.”

The life-changing part of the performance kept going long after the talent show ended. Watson’s parents shared a video of his performance on Facebook, and it has since generated numerous views. Watson was also invited to sing on a local TV broadcast and was offered the chance to record a demo CD.

Now, we’re happy to share Watson’s talent with you through his performance of “I Told You So.” You can tune in to it in the video below. Job well done young man!