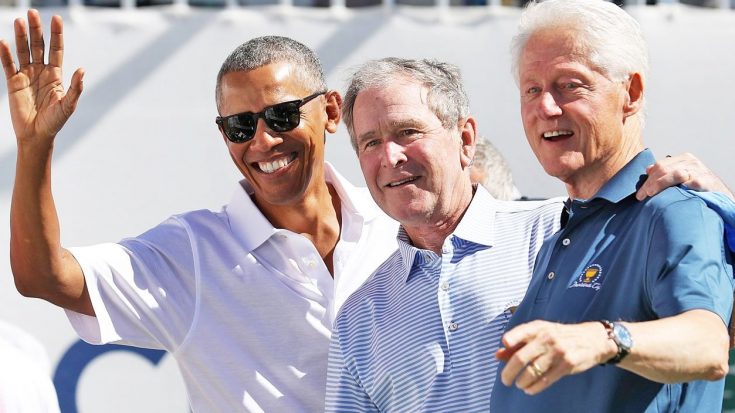 Some of the world’s most famous bromances include The Voice‘s Adam Levine and Blake Shelton, Matt Damon and Ben Affleck, Jimmy Fallon and Justin Timberlake, and Brad Pitt and George Clooney.

Well, these guys will have to take a back seat, because America has just found their new favorite bromance – a presidential one.

All three of these men used to run our country, and now they are hanging out at golf tournaments together, giving us the most historic bromance we never knew we needed. The Twitterverse has even started calling them “The Big Three.”

Most powerful men in the world -> dorky dad’s at a golf tournament. I love it #PresidentsCup pic.twitter.com/ROZd3Bp4t4

Golf legend Phil Mickelson didn’t miss his chance to take a selfie with The Big Three.

When you can take a selfie with three US Presidents, you do it!! pic.twitter.com/E3pNlZ07gs

This Twitter user pointed out The Big Three’s big smiles.

I never thought I’d see so much charisma in one photograph ??? #PresidentsCup pic.twitter.com/q0dSBmGZxz

One of the funnier tweets poked fun at Tiger Woods, whose career hasn’t been going great lately.

I imagine they’re talking about how Tiger hasn’t won a major since the Bush Administration #PresidentsCup pic.twitter.com/gn9Mj1ICDN

Do you think we’ll see these presidents hanging out again?! We sure hope so!