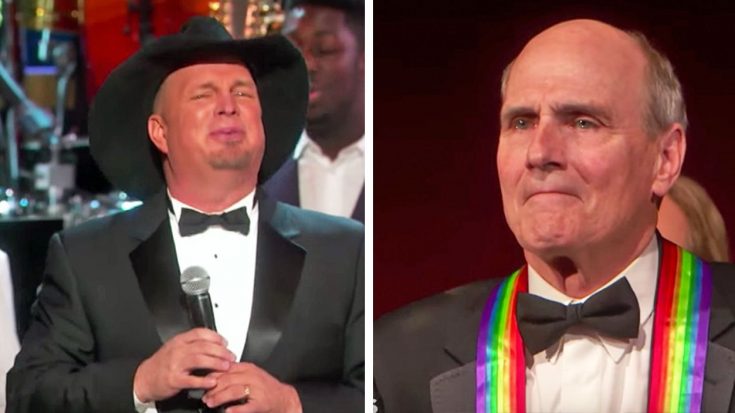 Garth Brooks has admitted on numerous occasions that he considers himself a beyond starstruck fan of the legendary musician and singer James Taylor, as he proudly named one of his daughters after the icon. While Brooks and his wife Trisha Yearwood set out to compile a sensational Christmas album, the singer was thrilled when informed he would be recording a song with the legend himself, taking to various talk shows to express his sheer disbelief.

It seems as if that mere musical collaboration was just the kick these stars needed to join forces for a variety of other events, as Brooks and Yearwood recently teamed up with Taylor and his wife to give a live performance of their musical number for an eager audience. However, it seems the two men have shared an immensely emotional moment that took place at the 2016 Kennedy Center Honors.

Brooks, dressed in a dapper tuxedo and sporting his classic black cowboy hat, performed one of Taylor’s iconic hits “Shower The People”, in which both the singers grew emotional throughout the tribute. Brooks appeared from behind a slowly rising projector screen that showcased Taylor’s face as Taylor himself was seen standing in the audience and kindly thanking the performer from afar.

As the song continued, Brooks was joined on stage by a group of choir singers that assisted the performer in carrying his tune and filling the blubbering crowd with endless emotion. Needless to say, the entire venue was an emotional mess!

Check out Brooks’ tribute below and tell us what you think!