By Miranda Raye on November 1, 2017
Advertisement 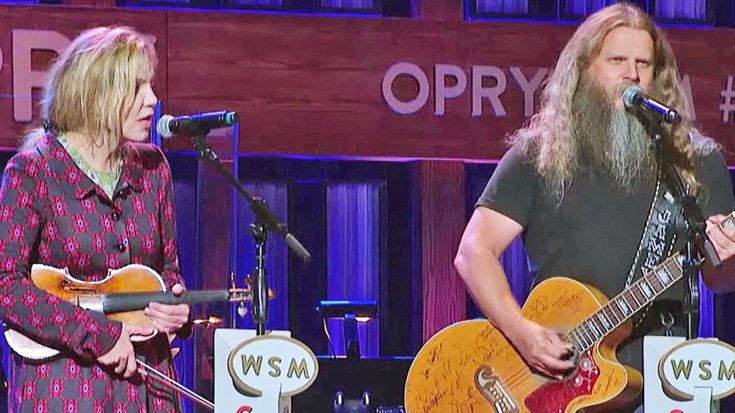 In today’s country music scene, two “modern” artists are admired for the amount of respect they pay to country’s classic roots.

Those two artists are Alison Krauss and Jamey Johnson, who have both made a point to perform and record some of country music’s most historical pieces.

Even though Krauss and Johnson have never recorded a duets album together, they frequently work together. The two often perform at the same events, including tribute concerts to legendary artists such as Kenny Rogers and Kris Kristofferson.

Other times, they will join one another on the same stage, and will treat the crowd to a performance of a classic country staple.

That’s exactly what the duo did when they appeared together at the Grand Ole Opry on one occasion. The Opry shared a video of their performance in February 2017, and it became an instant hit with classic country fans far and wide.

The song that Krauss and Johnson performed that day was “My Dixie Darlin’.” It dates back decades, and was originally recorded by skiffle (a mix of blues, jazz, and folk) artist Lonnie Donegan.

But the song took its roots in country music after it was performed by the Carter Family, and it is now known as one of their signature tunes.

In the Carter Family’s rendition, the song takes on a lively tone with some claps and stomps for a little extra spunk.

Their Version Is Entirely New

But Krauss and Johnson’s version removed all of that, and replaced the claps and stomps with Krauss’ stunning violin work.

The raw arrangement of the song gave Krauss and Johnson’s performance a truly “classic” feel. Johnson took the helm as the lead vocalist, while Krauss chimed in every now and then with delightful harmonies. Their voices are both well-suited to such a song, and they’re equally well-suited for each other. It’s no wonder why this performance was such a hit with the Opry crowd!

It’s a performance that you’re sure to enjoy as well. You can catch it in the clip below if you’d like.

After watching this, we want to hear Krauss and Johnson sing more classic country staples together!