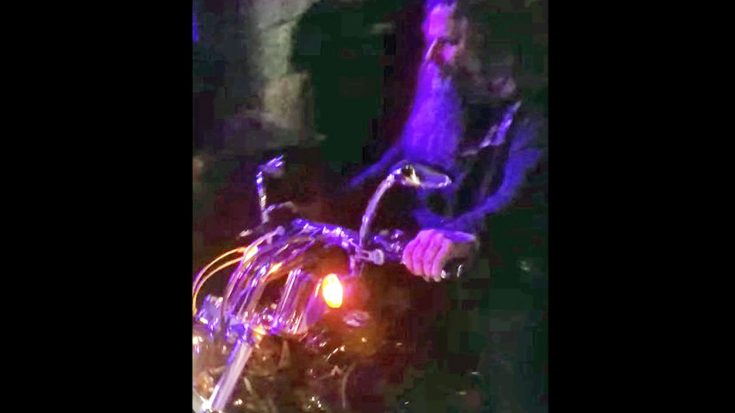 While the main outlaw movement in country movement occurred decades ago, there are still a few outlaws around today. One such artist is Jamey Johnson, who is following in the footsteps of the greats who came before him, such as Waylon Jennings and Merle Haggard.

As an accomplished singer and songwriter, Johnson is one of the most highly respected artists in country music. Because of this, he always seems to draw in large crowds everywhere he travels to perform.

Those who turn out to watch Johnson in concert always know that they can count on him to deliver a high-quality show. A crowd that gathered to watch him at one of his recent concerts got an extra special treat as they got the chance to watch him make a pretty cool entrance into the venue.

During his November 16 show in Sioux Falls, South Dakota, Johnson surprised the audience and his tour opener Chris Hennessey by riding a motorcycle out in front of the stage. He made sure to rev the engine a few times for added effect, which made the crowd go wild.

Hennessey was surprised to see Johnson make his way into the venue via motorcycle, and exclaimed to the crowd, “Jamey Johnson ladies and gentlemen!“

There was a good reason why Johnson made such an epic entrance…it was Hennessey’s birthday! As it turns out, the motorcycle was Johnson’s birthday gift for Hennessey.

The moment that Hennessey realized the motorcycle was for him was priceless. You could tell that he was overwhelmed by the news, and he pointed at Johnson as if to say, “you shouldn’t have.”

Hennessey must know his motorcycles well, because he was able to tell that it was a 1997 Harley Davidson. He informed the crowd of this, which prompted another series of loud and enthusiastic cheers. As they were hooting and hollering, Hennesy continued to express his surprise over the whole ordeal.

“I’m still not quite sure what’s going on folks, but I’m going to get to the bottom of this,” he said. He later went on to add, “I’m not real sure how to keep going folks. Jamey Johnson just rode in here on a motorcycle.”

We completely understand why he was so stunned! Johnson made a pretty badass entrance on that motorcycle! We know y’all want to see it, and you can in the video below.

This must have been so cool to see happen live!