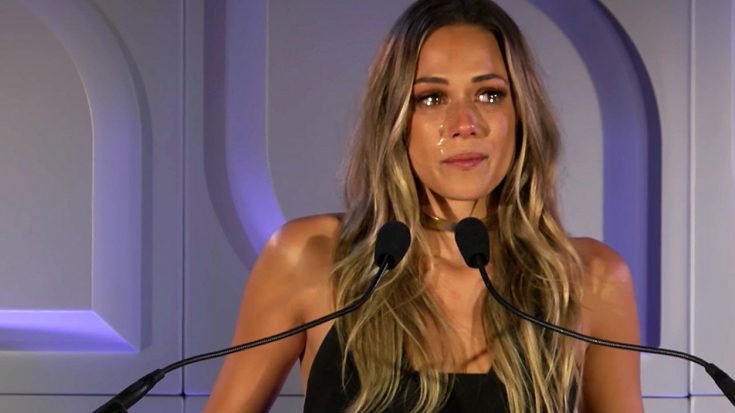 Former Dancing With The Stars contestant and sassy country singer Jana Kramer broke down into tears as she spoke to an audience about her gruesome domestic violence battle. Honored by Safe Horizon, an agency providing “children, adults and families the tools and resources they need to heal and recover” after various forms of abuse, Kramer attended the 2017 Champion Awards ceremony to gift her crowd with her story, sending both the star and her listeners to tears.

Kramer, just 19 years old during her battle, began to talk about her relationship turned secret marriage with a man 17 years her senior, admitting that her abuse from Michael Gambino started small and quickly grew to frightening lengths. The singer revealed that she kept her story silent for 14 years, adding, “…I thought that if I shared my story, people would view me as broken.”

It was one night, Kramer said, that she had reached her breaking point in the cycle of abuse. After deciding that she didn’t have to live her life in fear and agony anymore, the singer said, “So, I prayed to my grandpa and I said, ‘Please just take me away because I don’t want to be this person.'”

Events transpired in which Gambino subsequently choked Kramer until she passed out, putting the man in jail and country star back with her family. It was her honest speech and raw emotion that moved her audience and left an unforgettable moment of strength and perseverance that her viewers will cling to for a lifetime.

Congratulations to Kramer on her inspiring honor and her desire to share her heartbreaking story on how she survived domestic abuse. You can experience her moving speech below.