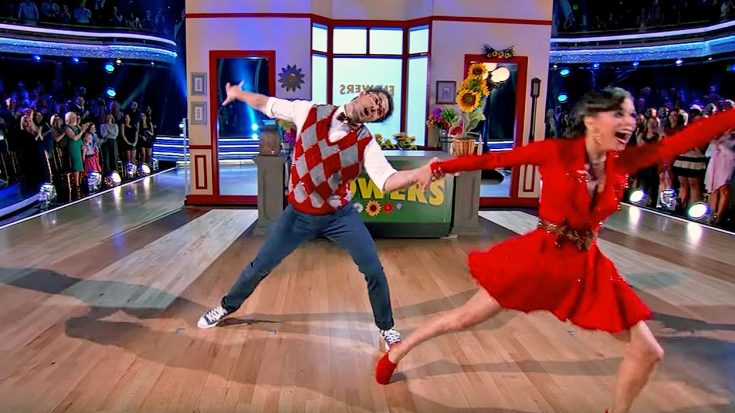 Jana Kramer and Dancing With the Stars partner, Gleb Savchenko, take on the roles of Seymour and Audrey in an impressive routine to the tune of “Little Shop of Horrors” on the Halloween special of ABC’s dancing competition series. The pair dance their way to safety in the jazz-inspired dance in a flower shop reminiscent to that in the 1986 rock musical horror comedy.

Little Shop of Horrors is a musical that tells the story of a lonely flower shop worker, Seymour, who falls madly in love with his coworker, Audrey, based in the 1960s slums of New York City. To attract more customers, Audrey places an unusual plant in the store window. The plant successfully attracts customers but unfortunately feeds on the flesh of humans, quickly leading Seymour and Aubrey down a dark path full of violence and murder.

The 32-year-old country singer donned a ’60s style red dress for the dance filled with cartwheels, flips, and splits. While the pair danced eloquently, they earned only 27 out of a possible 30 points in comparison to the other three pair’s perfect scores.

So what do you think? Did they do enough to advance to the next round? Let us know in the comments and be sure to watch their dance in the video below!