Jason Aldean & His Wife’s Fourth Carpool Karaoke Is The Sassiest Yet! 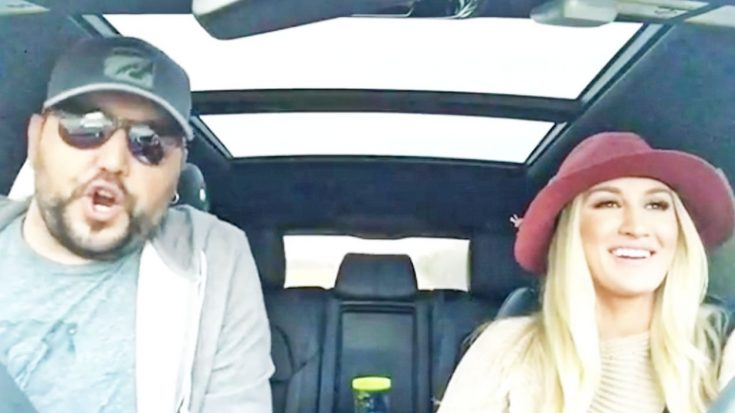 Brittany Kerr kicked Jason Aldean back out of the driver’s seat in this hysterical fourth chapter of Carpool Karaoke!

The two of them get back behind the wheel, crank up the radio to their favorite tunes, and turn on some serious sass in their latest “trippin'” adventure. The video kicks off with Aldean bursting his wife’s bubble (literally) by smacking her perfectly blown bubblegum.

“Don’t mind the stop sign; it’s more of a suggestion,” says Aldean as his wife blows through a stop, to which Kerr responds with an over-the-top eye roll. The hilarious blonde gets her country crooner husband back by subjecting him to her favorite pop songs such as Adele’s “Hello” and Usher’s “Without You.”

The hysterical couple then argues over a mysterious smell outside the car, with Kerr yelling accusingly at Aldean, “Did you fart?!” Aldean responds by singing along to Lynyrd Skynyrd’s “That Smell,” “Don’t you smell that smell?!”

While the origin of the mysterious smell remains unknown, we know for sure that we simply cannot get enough of these two’s hilarious videos! You can watch their fourth Carpool Karaoke in the video below as well as the video for Aldean’s “A Little More Summertime” featuring Kerr!