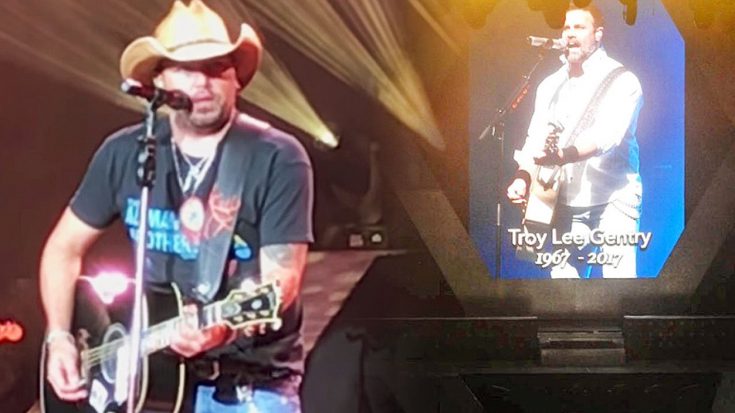 Following the tragic death of Montgomery Gentry‘s Troy Gentry on September 8, 2017, the country music community went into a deep state of mourning. One artist who was deeply affected by Gentry’s death was Jason Aldean, and he expressed his sadness on Twitter.

Along with an image of Gentry, Aldean wrote a short note explaining how much he and his Montgomery Gentry bandmate, Eddie Montgomery, had done for him in the past. He shared that both of them “were always extremely cool and supportive.”

The day after Gentry’s death, Aldean had a concert scheduled at the PNC Arts Center in Holmdel, New Jersey, which is a little over 50 miles from the site where Gentry’s helicopter crashed. That surely made the night all the more emotional for Aldean, who addressed Gentry’s death during his show.

First, Aldean acknowledged the death of country music icon Don Williams, who passed away on the same day as Gentry. He then moved on to speak about Gentry, saying how he was always up for a fun time:

Everyone lifted their drinks up in the air as a toast, including Aldean and his band. After that, he moved into playing a Montgomery Gentry hit as a tribute.

The song Aldean picked to play that night was “Lonely and Gone,” which was released as the second single off of Montgomery Gentry’s debut album, Tattoos & Scars. The song claimed the fifth spot on the Hot Country Songs chart and also reached the 46th spot on the Billboard Hot 100.

Aldean delivered a particularly passionate version of the song during his New Jersey concert. Although the song is pretty fast-paced and upbeat, don’t be surprised if you find yourself tearing up when you watch Aldean sing it. He gave the song his whole heart, and it shows, making it clear just how much Gentry meant to him.

Tune in below to watch Aldean honor Gentry with “Lonely and Gone.”