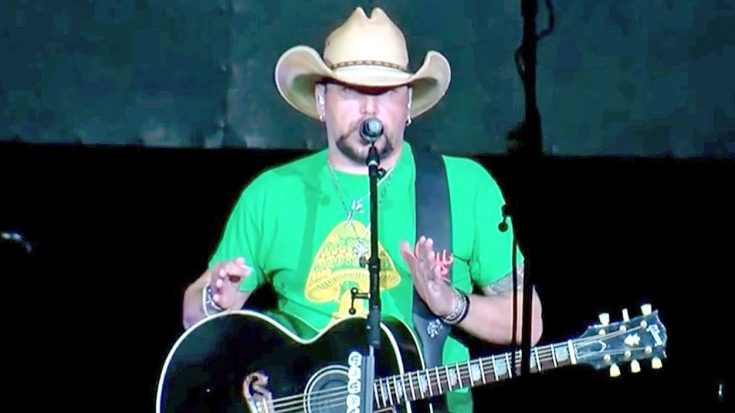 On Thursday night (October 12), Jason Aldean appeared in Tulsa, Oklahoma for his first concert since the shooting that took place at the Route 91 Harvest Festival in Las Vegas on October 1. Aldean was performing at the time that the shots rang out, killing 58 people and leaving hundreds of others with injuries.

Following the shooting, Aldean revealed that he would be canceling his concerts scheduled that upcoming weekend “out of respect for the victims, their families and our fans.” Prior to his concert on Thursday, Aldean had only made one public performance since the shooting. That took place when he made a surprise appearance on Saturday Night Live to play Tom Petty‘s “I Won’t Back Down” in honor of the shooting victims and Petty, who recently passed away.

After all this time, country fans were wondering what Aldean would say when the time finally came for him to make his concert comeback. They got their answer when he performed on Thursday, as he addressed the crowd for five minutes following a thunderous round of cheers.

Aldean opened his speech by thanking everyone for coming out to watch him play that night. He acknowledged that times have been tough for everyone lately, saying, “You guys are gonna help us get through this.”

He then went on to say how his prayers remain with all who were affected by the shooting: the injured victims, the families who lost loved ones, and all who attended the show on that tragic night. Aldean made sure to note that while many people were not injured physically, the mental scars of what they witnessed will remain with them.

His speech became more bold after that, as he directly called out the type of people who would commit such dreadful acts. That’s when he unleashed a fiery statement, which the crowd met with enthusiastic cheers:

Aldean closed his statement by admitting that he had been a bit unsure of how he should go about performing the show that night. But once he thought about it, he realized exactly how he should proceed.

“I want to play the show for you guys that the people in Las Vegas came to see and didn’t get a chance to,” he said.

You can tune into the fan-filmed video below to catch Aldean’s entire statement.

If you would like to make a contribution to help the Vegas shooting victims and the families who lost loved ones, you can do so by donating to the Las Vegas Victims’ Fund. This verified GoFundMe fundraiser has raised over $10 million since it was established by the Clark County Commission Chair and Las Vegas Sheriff the day after the shooting.

You can donate to the Las Vegas Victims’ fund by clicking here.