Jason Aldean Reveals What Country Music Is ‘Overdue’ For 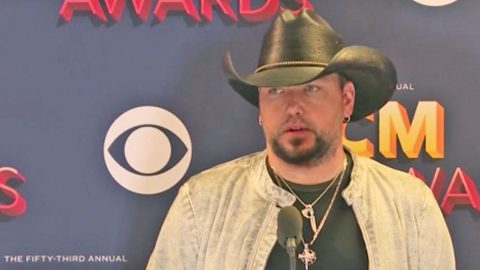 That’s what he accomplished at the 2018 ACM Awards – he won Entertainer of the Year for the third year in a row. Beating out Garth Brooks, Luke Bryan, Chris Stapleton, and Keith Urban, Aldean’s speech was short, but powerfully appropriate.

After thanking his team and his family, he said, “To my Route 91 people, you guys are in my heart always and we love Vegas. Vegas strong, baby. Thank you so much.”

After the show, Aldean spoke with the press and that’s when he spoke about his opinion about no women being nominated for Entertainer of the Year.

“When the first ballot comes through, there’s like 50 people on the ballot and for whatever reason, there were no females this year, but I definitely think there are some that are worthy of being on there for sure,” he said.

Continuing, he revealed who he thinks should be on the ballot.

“Miranda, Carrie… I told Lauren Alaina tonight, ‘You sang your behind off tonight.’ She sounded amazing. You’ve got her and Kelsea—some new ones coming up—Maren, who I think is phenomenal, too. I definitely think there’s some that should be represented in there,” he said.

Watch the Lauren Alaina performance he’s raving about below.

He continued, “Honestly, down the road if they happen to win one, I’ll be the first one up congratulating them because it’s probably a little overdue.”

Do you agree with Aldean in that a female Entertainer of the Year is “overdue”? Let us know in the comments!

Watch his full interview below.