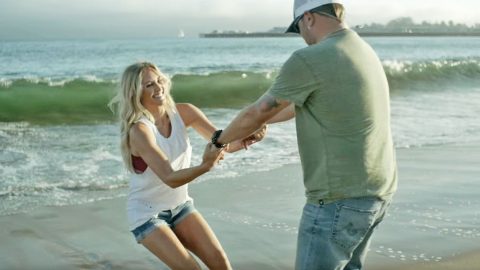 Jason Aldean showed off his sensitive side in the video for “A Little More Summertime,” a melancholy country ballad detailing the pain of experiencing fleeting summer love.

The country singer’s beautiful wife Brittany Kerr co-stars in the scenic video that takes you on a couple’s journey falling in and out of love. The video is set in a vacation destination, intertwining clips of their romance blooming under the warm summer sun juxtaposed against sorrowful clips of the pair drifting apart in colder weather.

Aldean was drawn to the track “A Little More Summertime” in the way it paints a vivid picture in the listener’s mind, sharing he felt his music began to drift away from story telling songs in the past.

“The second single ‘A Little More Summertime’ was one of the first songs we found for the record, ” Aldean said according to Sounds Like Nashville. “To me, I don’t know, there was just something really cool melodically about it that was a little different than some of the things we had in the past…[What] we were missing on the last album was those songs that tell the stories and lay it out for you and paint the picture.”

The country singer and the blonde beauty got married back in March of 2015 on the picturesque shoreline of Cancun, Mexico. Now with two years of marriage under their belt, the pair appear to more in love than ever.

You can check out their music video for “A Little Summertime” below!