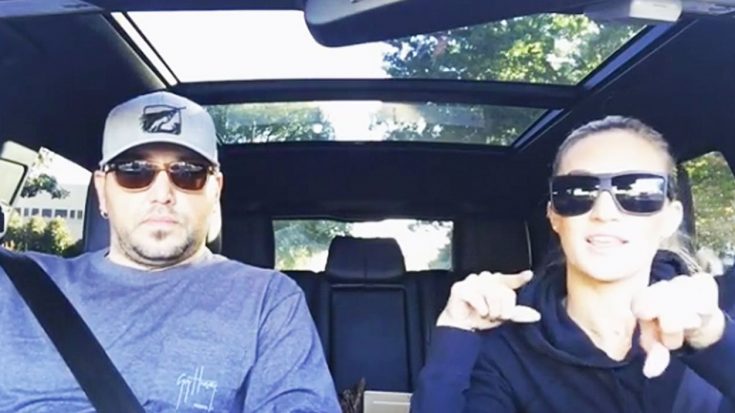 Jason Aldean and his lovely wife Brittany Kerr cranked up the radio, and some major sass, in their latest roading endeavor! The two recorded their “trippin'” experience complete with country tunes, playful jokes, and maybe even a couple driving uh-ohs!

Kerr stole the show in the driver’s seat, as shotgun rider Aldean explains, “She never lets me drive anywhere.” His wife responds with a sassy, “Because you can’t drive,” as Aldean later rebutted with a sarcastic “And you’re talking about my driving,” during what seemed as an awkward merge between Kerr and another car.

The two continued with the hilarious attitude as Aldean pleaded with Kerr to not look at herself in the mirror during their ride, in which Kerr firmly responded with, “I’m not, cooter.”

Amidst listening to a variety of music genres, Aldean’s upbeat song “A Little More Summertime” stole the speakers, leaving Kerr to jokingly ask, “Who sings this?” The crooner took his opportunity to exclaim, “I don’t know, but that guy is good! That boy can SING!” Kerr transitions the country tunes into a handful of rap songs, leaving Aldean listening to J. Cole’s “No Role Modelz”, confessing, “I ain’t never heard this damn song in my life.”

Check out their hysterical video below!