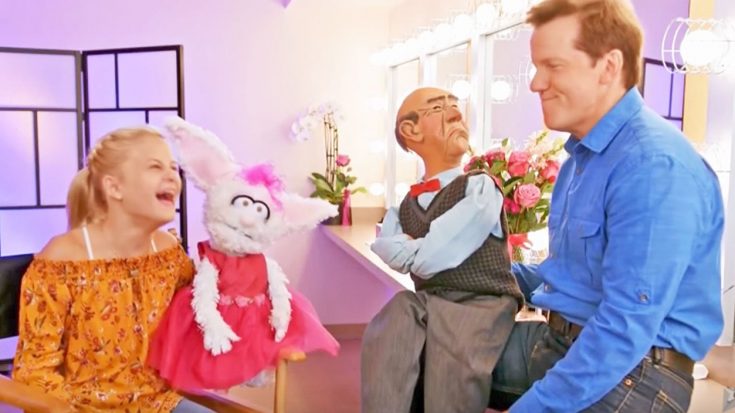 Darci Lynne Farmer made history as one of the three youngest contestants to ever be named champion on NBC’s hit competition series, America’s Got Talent. From earning the coveted “Golden Buzzer” from judge Mel B with her unreal singing ventriloquism routine, it was clear Darci was destined to be a star.

Following her seemingly impossible final routine on the show in which two of her puppets performed a duet to the Beatles hit “With a Little Help From My Friends,” the singer was named the Season 12 winner over her fellow contestants.

However, prior to her epic win, one of the most famous ventriloquists in history, comedian Jeff Dunham, and his friend Walter came by to cheer Darci and her bunny puppet Petunia on.

After Dunham expressed how proud he was of her success on the show, Darci and Jeff exited the room, leaving behind Walter and Petunia, who came to life the second their human counterparts exited to the dressing room.

“I need you to do me a favor,” said Walter. “Help Darci make her dreams come true.”

“I absolutely will Walter! You know what? You’re a nice old man,” said the adorable puppet.

“Eh, whatever. Is Tyra [Banks] around here?” replied Walter, snapping back to his typical grumpy attitude.

In addition to winning the ultimate prize of $1 million, Darci is also headlined her very own show in Las Vegas, Nevada. While her talent for the unique hobby is immense, Darci only found her interest in ventriloquism came about two years prior when she ten years old.