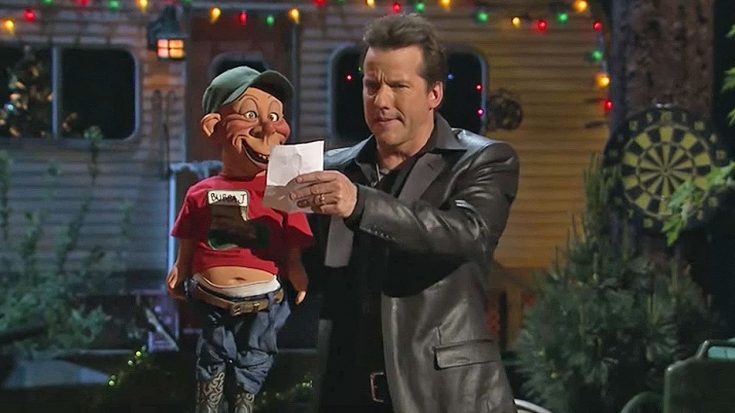 One puppet had some serious apologizing to do when his mishaps from the previous Christmas may have put him on the Naughty List for life! Jeff Dunham‘s lovable redneck Bubba J made an appearance during one of Dunham’s hilarious Christmas specials and the audience could not get enough! Proudly showing his pot belly peeking through just above his underwear-baring pants, Bubba J was all grins when he told Dunham and the audience of his letter to Santa Claus!

After explaining his love for anything beer and a few moments of hysterical stupidity, the puppet began to read his letter out loud to the audience. He read, “Dear Santa, it’s me, Bubba J,” as he giggled and announced to the crowd, “That’s me!” He continued, “Remember? I was the guy last Christmas that lit the fireplace just as you came down the chimney! Sorry about your suit and your ass!“

The audience roared with laughter as Dunham’s confused expression caught the puppet’s attention. Bubba J denied all blame and he defend himself by blaming the mishap on his fireplace! Dunham continues to question the puppet saying, “So, how did you put him out?” Bubba J lets out a nervous laugh as he admits, “I peed on him.“

Laughter and cheers filled the venue as Bubba J’s grin seemed to grow wider! After further describing the incident, he also admits that his cousin Elroy “shot Santa’s lead deer”, explaining that the family ate well all month after that kill!

Bubba J’s letter wraps up with a warning to Santa that they will be straying from the typical “leave some cookies out for Santa” route and going with a more original approach by leaving him reindeer jerky! Yikes!

Be sure to check out the hilarious clip below and tell us what you thought!