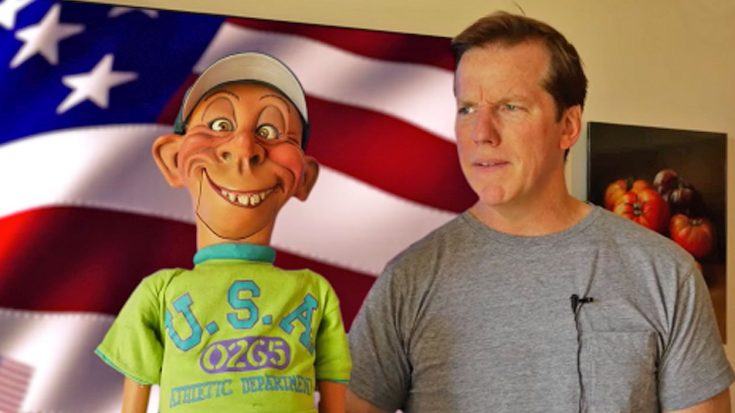 Over the years, comedian and ventriloquist Jeff Dunham has been making us roll with laughter with his hysterical stand up routines that include several different puppets.

Our favorite puppet of his is Bubba J, who is a beer drinkin’, NASCAR watchin’ redneck that has no filter. If you’re a true redneck, there is at least one person in your family that reminds you of Bubba J!

Just a few days following 2016’s presidential election. Bubba J took to YouTube to offer some words of encouragement to Americans, no matter whose side you are on.

“Our country is in trouble. We have been in many difficult times before, but in the last month, and especially in the last few days, we are a nation truly divided,” he says. “Half of the people think that their choice was the greatest move for change in America. And the other half thinks a monster has won.”

He goes on to explain how celebrities have taken sides and some people are threatening to move out of the country. Bubba J also says that we have to come together, because we all really want the same things: “roof over our heads, food on the table, a good paying job, and a way to care for our children and loved ones, in sickness and in health.”

“So, Uncle Sam, we’re going to be okay because I really don’t think this guy’s an ass. But Brad, you really need to go back to Angelina!” Bubba J says. Dunham finally appears, looking more confused than ever.

“Wait – this is about Brad and Angelina?” Dunham asked Bubba J.

“I thought you were talking about the election,” Dunham said.

He was talking about the divorce of Brad Pitt and Angelina Jolie the entire time! This proves, yet again, that Bubba J is the funniest redneck around. Watch the hysterical clip below.