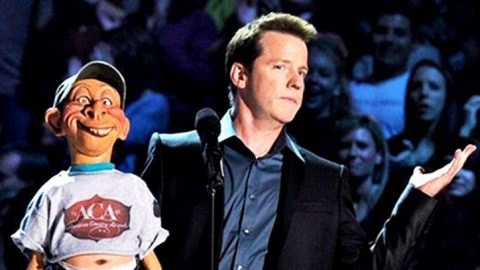 Good ol’ Bubba J tells how he just got into some trouble after hitting on Reba backstage.

Taking the stage during the annual American Country Awards show, beloved ventriloquist Jeff Dunham brought out everyone’s favorite character for a set that nobody will easily forget!

Dunham, a world-renowned ventriloquist, usually features a few different puppets during his shows, but for this set at the ACAs, he knew just one would be the right fit: Redneck Bubba J!

All of his puppets poke fun at stereotypes and especially Bubba J – who Dunham has referred to as a “beer-drinking redneck” from a “white trash trailer park”. Usually Bubba J’s jokes involve some play on redneck stereotypes and he frequently talks about his hilarious family reunions – which is where he says he met his wife!

Bubba J isn’t afraid to hold anything back and is quite upfront with the goings-ons in his life – especially when he gets to leave home for an amazing awards ceremony like the one held by the American Country Awards.

In this skit, though, Bubba J reveals that he recently had an interesting experience backstage with one of the most famous female performers in country music – Reba McEntire!

“Oooh her security guard tried to punch me in the tooth!” Bubba revealed, adding, “I like Reba, but when I was talking to her backstage tonight – her and her hair looked AWFUL.”

With a hidden smirk, Dunham revealed not all was as Bubba J thought it was, “Bubba J, you were talking to Carrot Top.”

And with that the audience was thrown into an outrageous fit of laughter that spread throughout the arena before Bubba J continued on with his skit adding in some of the funniest stuff ever said during the awards show!

It’s performances like these that have truly brought Jeff Dunham to the forefront of the entertainment world and he remains on the top with a series of rotating shows on Comedy Central including a famously hilarious Christmas special called Jeff Dunham’s Very Special Christmas Special.