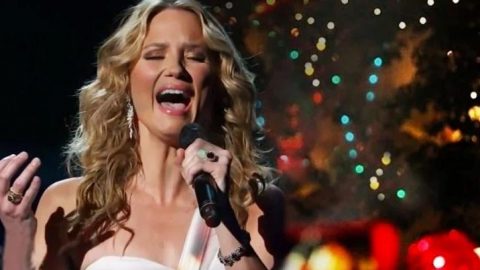 Known for her awe-inducing vocal talent, dazzling showmanship, and incredible hit songs, Nettles has done quite a bit throughout her 20-year career – and this is just one more amazing performance to add to the growing list!

Nettles is also known as one half of country music duo, Sugarland, who have charted a bevy of stunning hits like “Baby Girl”, “Want To,” and their Grammy-winning “Stay.”

Alongside her sparkling career as lead vocalist in Sugarland, Nettles has come to be known as one of the most powerful vocalists in country music and has established a history of mash-ups and country-infused duets with artists from all genres. She also regularly hosts television events in the country music genre and has been the longstanding host of the CMA’s Country Christmas event since its debut in 2010.

In this stunning and heavenly performance of “O Holy Night” and the late Leonard Cohen’s “Hallelujah,” Nettles takes a seat in the SiriusXM studio for an episode of their “Country Christmas” series and recorded this beautiful song set live!

Throughout this video, you can see the complete joy and passion she sings with as she moves through each verse so beautifully and elegantly – giving off a feeling of weightlessness through these uplifting words.

With only a soft guitar strumming along to the music, Nettles showcases her unbridled and raw talent she’s spent years perfecting – and there’s no doubt why they chose her to sing these two songs!

It’s clear that she is pouring her heart and soul into each and every word she sings and that she is deeply connected to the music as it flows through her.

Watch the video below as this Grammy-winning songstress delivers a knockout performance of a classic Christmas song, “O Holy Night” and smoothly moves into a delightful cover of Leonard Cohen’s “Hallelujah”.