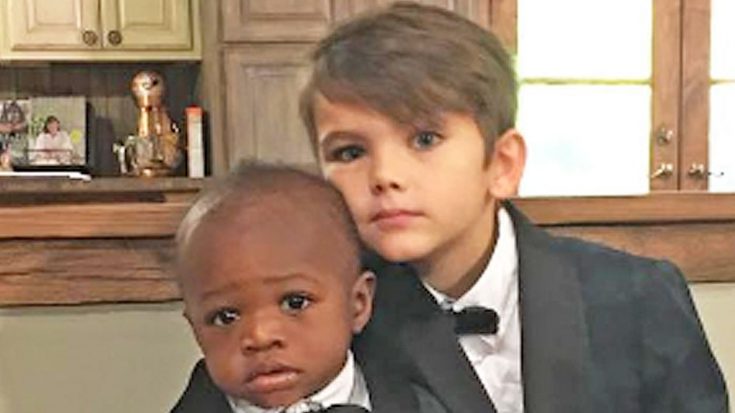 Thanks to the TV show Duck Dynasty, we have been welcomed with open arms by the entire Robertson family. It seems as though the family grows every time we blink with marriages, births, adoptions, and even pets!

Last year, Jep Robertson and his wife, Jessica, welcomed a new addition to their family. After many years of trying for another child, the married couple of 14 years decided to try their hand at adoption. A Duck Dynasty spin-off show Jep & Jessica: Growing the Dynasty followed their journey of adopting a baby boy, whom they names Jules Augustus “Gus” Robertson.

Thanks to the new show and social media, we were able to watch “Baby Gus” grow and hit big milestones. He joined big brother River, and big sisters Lily, Merritt, and Priscilla. Being the only boy for seven whole years, River was ecstatic to finally have a brother.

Almost immediately, the parents took advantage of having two sons and started dressing them in matching clothes! In a super cute photo Jep posted on Twitter, Gus and River were wearing matching pizza shirts!

My boys chillin in the Kia with matching pizza shirts. pic.twitter.com/dC6y479ZiV

They previously matched for Halloween, both dressing as Superman.