Jep Robertson Attempts To Teach His Daughters How To Fish, But It Doesn’t Go As Planned

By Jennifer Pernicano on August 18, 2016
Advertisement 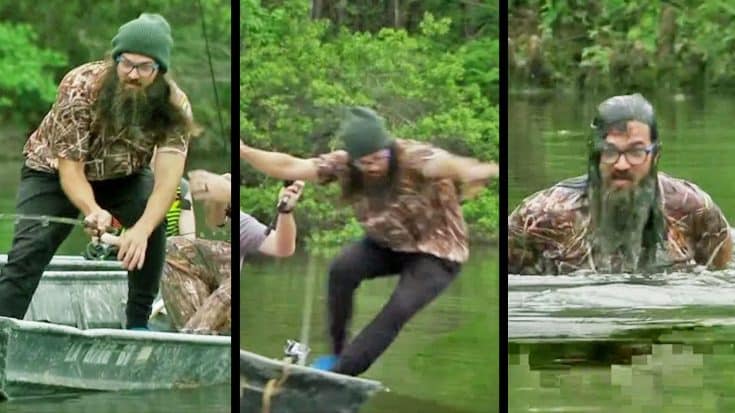 Jep and Jessica Robertson homeschool their four school-aged children, Lily, Merritt, Priscilla, and River. They decided to do it because of how large their family is and how sporadic their work schedules are.

If they have to travel, they can homeschool their kids on the road. It’s a perfect scenario for their family. Jep especially likes it because he gets to take his kids on field trips.

In a brand new episode of Jep & Jessica: Growing the Dynasty, Jep takes his oldest daughters, Lily and Merritt, on a field trip out on the lake to learn how to fish. Uncle Si and their good buddy Martin, who also appears on Duck Dynasty, go with them.

The men try to teach the girls patience because they get pretty bored just sitting in their boat not catching anything. Being the good dad that he is, he really, really wants to catch a bunch of fish for his daughters.

“If you wanna catch more fish, you put more poles in the water,” Jep tells them.

While setting up more fishing poles, he makes the mistake of standing up in his boat he’s sharing with Martin. Martin feels a tug on his line, so he tries to reel in the fish, but with his aggressive technique, he rocks the boat and Jep falls in the water!

To make matters worse, after he falls in the lake, Jep loses his keys! He does everything he can to find them because he doesn’t want to face the wrath of Jennifer, his wife Jessica’s angry alter ego.

Take a look at the clips below to see how it all folds out.