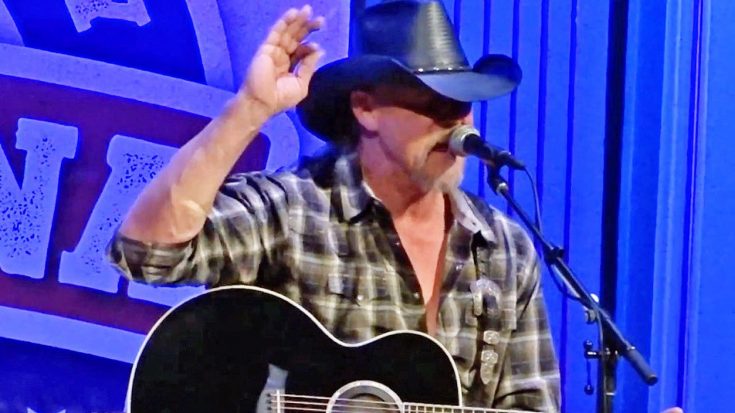 On January 19, 2016, Trace Adkins reappeared on the country music scene with a new single for the first time in three years. Called “Jesus and Jones,” the song became the first single off of his unnamed album.

Although Adkins didn’t write the song, he’s made it clear how well it captures his life story. Speaking to a crowd at a benefit concert in May, Adkins said he got his start in music by playing George Jones songs in bars and singing in church the next day.

It’s this competition between “bad” and “good” that consumed Adkins’ life and serves as the theme of “Jesus and Jones.” Plenty of country fans were able to relate to the song’s message, and it made its way on to the Country Airplay chart as a result.

At the above mentioned benefit concert, Adkins decided to deliver an acoustic rendition of “Jesus and Jones.” This stripped-down performance made the song’s meaning stronger than ever and more relatable than before.

Go ahead and watch that performance below, then be sure you download the original recording of the song here so you can enjoy it later.

Following “Jesus and Jones,” Adkins released his second new single, called “Lit.” Much more on the “Jones” side of the spectrum, “Lit” is a fun-filled tune all about having a good time and loving life.

If you were impressed by “Jesus and Jones,” just wait until you hear “Lit!” You can check out its lyric video below. Then, download the song off iTunes by heading here.