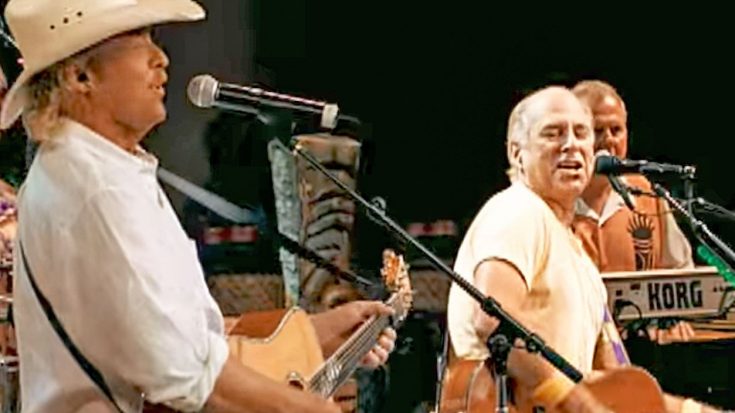 Alan Jackson sure isn’t one to waste a good drink, regardless of whether the clock is giving the green light or not!

Jackson teamed up with singer Jimmy Buffett to create not only one of the best drinking anthems ever recorded, but to encourage that early morning shot without a side of regret!

Jackson opens the song’s sensational, getaway vacation themed music video as he casually cruises the crystal clear waters on a pristine fishing boat. Working on his tan and waiting for a bite, the cowboy’s convincing lyrics send us straight to that much-needed drink and possibly a dance or two!

As he dives further into the song, Jackson enters a beach-themed bar with numerous vacationers and locals having the times of their lives with a combination of comforting music and unbelievable magic and tricks from the high on life bartenders!

Jackson asks the song’s iconic question in regards to drinking before the socially acceptable hour as he sings, “What would Jimmy Buffett do?”

Buffett cooly responds with a nonchalant “Funny you should ask, Alan,” as he appears alongside the cowboy onstage for a lively performance!

The two finish off the song with laughs and smiles as the audience roars with applause! Now that’s how you put on a show!

Watch the music video below and tell us what you think!