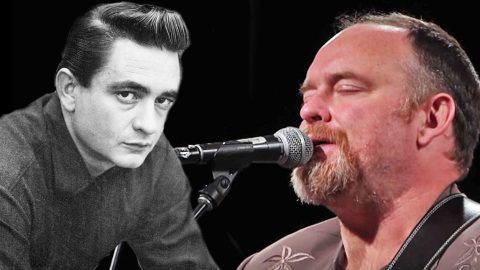 Almost 15 years have passed since the world was rocked by news of the death of country music legends, Johnny Cash and June Carter. No one will ever truly replace one of the most iconic couples to ever hit country music, but fans may just be able to find consolation in the talent of their gifted son.

47-year-old John Carter Cash, the son of the music icons, exudes that same Cash talent and charm that the world saw in his parents. John gives fans a glimmer of the magic his parents created every time they took the stage with a haunting rendition of his father’s version of Nine Inch Nails’ “Hurt.”

John’s rendition of his father’s song took place on May 3, 2017 as part of Music City Roots. The singer performed the song highly reminiscent of his father, channeling the emotion Johnny poured into one of his final recordings.

The music video for “Hurt,” featuring Johnny, was nominated in several categories at MTV’s 2013 Video Music Awards, winning in the category of “Best Cinematography.” Even though the song was originally written by Trent Reznor’s Nine Inch Nails, Cash made the song his own inevitably resulting in Reznor later admitting the song no longer belonged to him.

You can see John’s rendition of “Hurt” below.