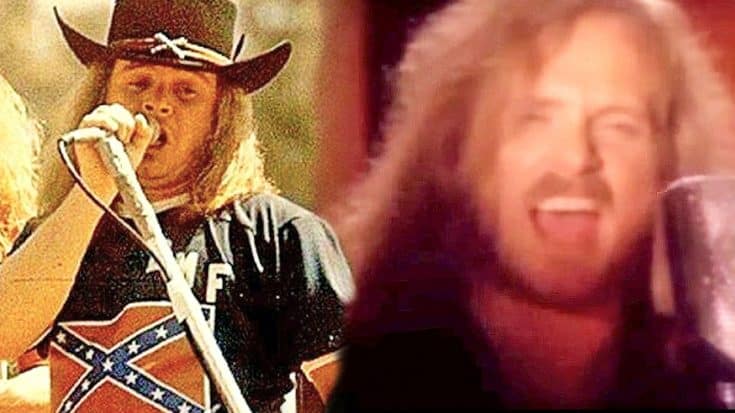 October 20, 1977 was a dark day in the history of Lynyrd Skynyrd. On that day, the group lost three of its members in a devastating plane crash: backup singer Cassie Gaines, guitarist Steve Gaines, and lead singer Ronnie Van Zant. But Skynyrd didn’t let that tragedy stop them.

After a ten-year hiatus, Skynyrd reunited with Ronnie’s younger brother Johnny filling in his shoes as the group’s lead vocalist. The band made a triumphant return under Johnny’s leadership, and eventually found their way back into the studio.

In 1997, Skynyrd released their ninth studio album, titled Twenty, which refers to the passing of 20 years since the place crash of 1977. Although the album contained an abundance of new material, Skynyrd released one of their older tracks,”Travelin’ Man,” as the first single, and for a special reason.

Prior to Twenty, Skynyrd’s “Travelin’ Man” had only been released as a live track on their 1976 live album One More From the Road, which makes Twenty‘s version the first studio recording of the song.

When they were putting the album together, guitarist Rickey Medlocke wondered if Johnny would be open to performing the song as a duet with Ronnie. He hoped to accomplish this by using modern technology to incorporate Ronnie’s original vocals from the live track into Johnny’s recording. In an interview with VH-1 in 1997, Johnny explained what he thought about Rickey’s idea:

“I thought, ‘well okay, if it’s going to be done then it’s gotta be done honest and justice to what Lynyrd Skynyrd’s about…the way it’s came out on the record I’m really, really happy about it.”

The fans were really happy about it too, and “Travelin’ Man” ended up climbing to the 22nd spot on the Billboard Mainstream Rock chart. Skynyrd also released a music video for the song in 1997, which switches between footage of Johnny and Ronnie singing the song, adding further to the duet effect.

Tune in below to watch the music video for “Travelin’ Man.”

Wow, it sure is sweet to hear the two Van Zant brothers singing together on this classic Skynyrd tune!