Kacey Musgraves Begs To Know “What Are You Doing New Year’s Eve?” 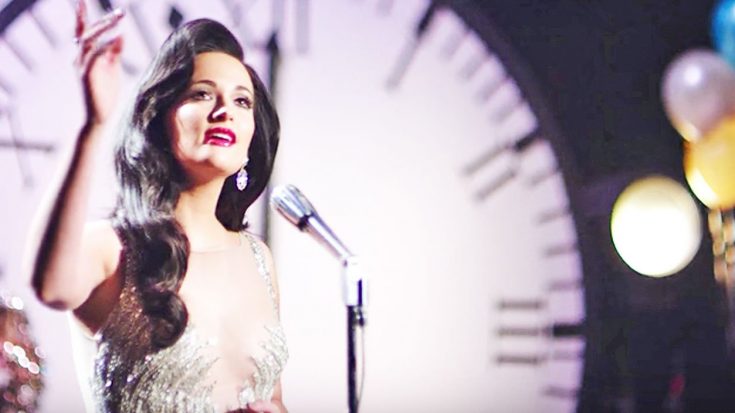 A lovesick Kacey Musgraves got all dolled up to ask one special guy a very important question, “What Are You Doing New Year’s Eve?”

What are you wearing for NYE? Two-time #Grammy award winning singer Kacey Musgraves showed us exactly what she'll be…

In a new video for her take on the 1947 tune, Musgraves exuded old Hollywood in a glitzy ballgown, polished curls, and glittery bright pink lips. In front of a stage that gives off a failed party vibe, the singer gives a sexy twist to the classic song while still maintaining the utmost of class.

The scene switches to Musgraves floating on top of a crescent moon while she sings to her absent lover. In a glittery flapper-like dress, the singer floats among the stars alongside her precious pup. As the music fades out, the lights go down and Musgraves has a party for one. With confetti falling from the sky and sparklers in her hand, she rings in the new year.

Musgraves released her cover of “What Are You Doing New Years’ Eve” off her Christmas album, A Very Kacey Christmas. The album also included several other classics including tropical holiday tune “Mele Kalikimaka” in addition to several originals such as “A Willie Nice Christmas” featuring none other than Willie Nelson.

Upon releasing the album, the singer-songwriter said she wanted to convey that while the holidays are intended to be a time for love and joy, for some people the holidays bring nothing but sadness.

“There can be a touch of sad feelings and memories during the holiday season for a lot of people so I knew when I went in to write I wanted to include all the emotions this time of year can bring out,” she said on Instagram.

On Christmas Eve of 2016, Musgraves knew for a fact she wasn’t going to be spending that upcoming New Years’ Eve alone. Her dream guy got down on one knee and proposed forever to her. What a beautiful way to ring in her new year!

You can watch her video for “What Are You Doing New Year’s Eve?” in the video below!