Keith Urban And Nicole Kidman Sing ‘The Fighter’ In The Car

By Jennifer Pernicano on May 12, 2016
Advertisement 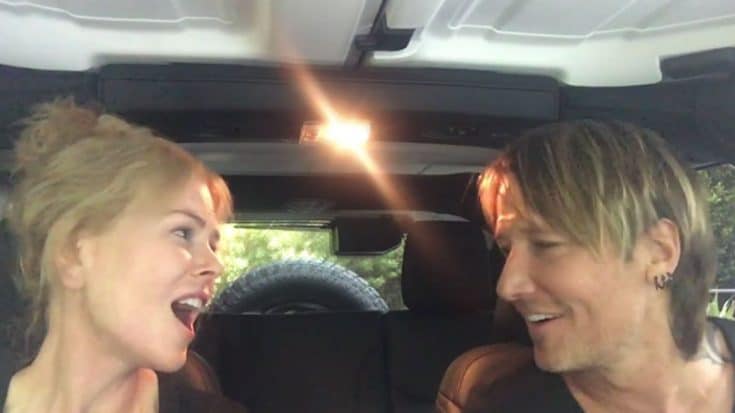 With the release of his eighth American studio album, Ripcord, Keith Urban has gained the support of many celebrities.

Tweets of congratulations have been sent, but no one’s support means more to Urban than his lovely wife, Nicole Kidman’s.

Kidman has already proved she is a huge fan of the album by posting a video of herself on a movie set singing “Wasted Time.” You can’t help but smile while watching it!

Wasted Time by Keith Urban – From the new album "RIPCORD"

Getting ready to shoot Big Little Lies, jamming to my man listening to Wasted Time. Congrats on #RIPCORD baby!

In May 2016, Urban shared a special video of the two singing his single, “The Fighter,” which is his duet with Carrie Underwood.

When the song started, Kidman adorably screamed, “Oh my God, I love this song!”

Urban responded, “Thank goodness!” After a hilarious moment where the recording cut out and urban continued to sing, they began singing the song to each other.

Sitting in their car, they giggle, smile and flirt with one another and it is seriously the cutest thing we’ve ever seen! Kidman sang Underwood’s part and the way they look at each other just makes you smile.

Watching them sing this song to each other proves that it really is Urban’s ode to Kidman. He promises to fight for their relationship and apologized for her past pain.

Watch their adorable duet below!