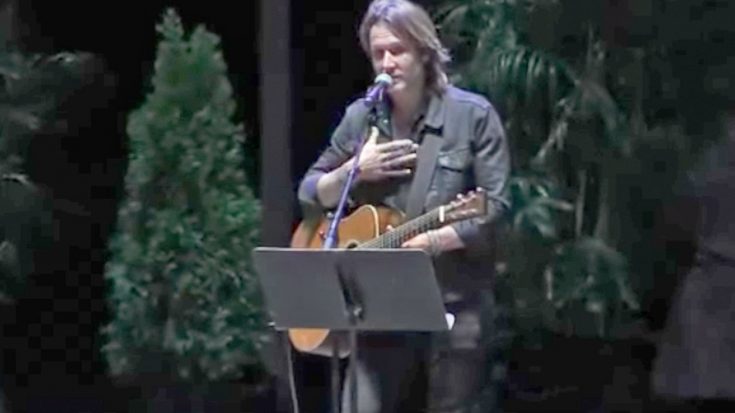 At least 59 people have been pronounced dead with approximately 527 declared injured since a gunman opened fire on the attendees of Route 91 Harvest Music Festival during Jason Aldean’s set from the 32nd floor of Mandalay Bay Resort and Casino Sunday night at 10:08 p.m. (Oct.1).

Following the horrific attack, the country music community banded together at a vigil in Nashville, Tennessee to pay their respects for those affected by the “act of pure evil” – as described by President Donald Trump.

Country singers one-by-one took the stage to honor the lives lost during the senseless act, including father of two and country music superstar, Keith Urban. Prior to his tearful performance of Simon & Garfunkel’s 1970 hit “Bridge Over Troubled Water,” the singer revealed how he broke the tragic news to his 9-year-old daughter, Sunday Rose.

“I started this morning by finding out about it and being shell-shocked all morning, getting my kids ready for school,” Urban told the audience of 600 packed into Ascend Amphitheater on Monday night (Oct. 2).

The country singer is the father to Sunday Rose (9) and Faith Margaret (6) whom he raises alongside wife Nicole Kidman.

“Our 9-year-old, as I was driving her to school this morning, said to me, ‘Dad, you seem quiet,'” he shared with the crowd. “I said, ‘Yeah, a lot of people were killed last night,’ and she said, ‘Did you know any of them?’ And I said, ‘Not that I know of.’ And she said, ‘Why do you look so sad?'” recalled Urban. “And I said, ‘First of all, these were innocent people horrifically taken, and secondly they’re like family,'” he continued. “It’s the one thing about country music that’s always been at the center of it and that it is community, it’s about community. And so I did know those people in that way.”

The country singer concluded his story by conveying how grateful he is in this moment to be given the chance to “put some light in the world.”

The vigil was hosted by Nashville’s Mayor Megan Barry, CEO of CMA Sarah Trahern, and President of Nashville Convention & Visitors Corp Butch Sprydon. In addition to Urban, fellow artists Vince Gill, Alison Krauss, and Amy Grant took the stage to honor those affected by what is being described as the deadliest mass shooting in modern American history.

You can watch Urban’s tribute performance below.