Keith Urban Gets Showed Up On Stage By Insanely Talented Fan 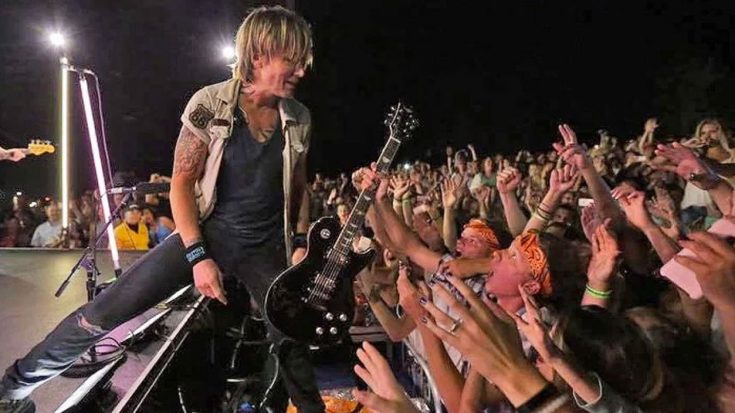 When Keith Urban saw a fan holding a sign that said, “Can I play your guitar?” he was a bit skeptical. Urban looked to the person next to the fan whose sign read, “It’s my boyfriend’s birthday!”

A massive shout out to Rob – who killed it last night on the guitar!!! You played your ass off! – KU #ripCORDWorldTour

After establishing that the fan indeed did play guitar, Urban invited him on stage. He introduced himself as Rob and his girlfriend, Lex, spoke highly of him to Urban, and even said that Rob should be Urban’s backup guitarist.

“No pressure!” Urban told the young man. Rob then revealed his dream job is to become a guitar player.

“Let’s grab another one of my guitars real quick. Heck, play this one,” Urban said as he takes the guitar he was playing off and hands it to Rob.

Immediately, Rob starts SHREDDING, and the crowd went wild. He even surprised Urban with his talent! They began playing Urban’s song “Good Time,” which had a few very difficult guitar riffs.

Rob definitely held his own with Urban’s band. He and Urban had amazing stage presence together and Rob even looked like he was singing some harmonies. Rob stole the show with his incredible guitar solos and the crowd was loving it.

“Killed it! He totally killed it! That was badass, man,” Urban yelled to the crowd after the performance. This will be a night Rob will remember forever! Urban even gave him a shout out after the concert.

A massive shout out to Rob – who killed it tonight on the guitar!!! You played your ass off! – KU #ripCORDWorldTour