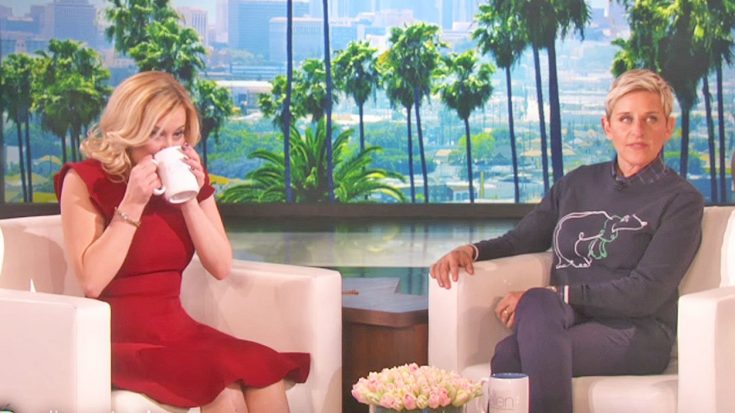 The world first fell in love with the hilarious and humble spirit that is Kellie Pickler following her emotionally-charged audition on Season 5 of American Idol back in 2006.

While the North Carolina-native only placed sixth on the singing series, she has managed to remain in the spotlight through her quirky antics and insane vocals.

While promoting her and husband Kyle Jacobs’ CMT reality show, I Love Kellie Pickler, back in 2015, Pickler appeared on The Ellen Show, inevitably diving into a hilarious story. After discussing why she thinks people have fallen in love with the show, and her loving relationship with her husband, the talkshow host asks if there’s anything about Jacobs that annoys her.

One of the most special days in my life will always be June 15th…It is my grandmother’s birthday and it’s also the day my husband Kyle proposed. On that date in 2010, Kyle and I were in Rosemary Beach, FL on what he told me was just a “vacation”…That evening, after a romantic dinner, we took a sunset stroll on the beach…Little did I know, he had secretly planted a small wooden box in the sand…It looked like it had washed up from sea, but upon opening it, I found a true treasure…Inside contained a journal that Kyle had written for me, a seashell with my Grandmother’s name “Faye” written on it, and a beautiful engagement ring. After Kyle got down on one knee and me screaming "YES!!!", we watched the sunset slowly paint a colorful end to a beautiful day…What was so incredible is that Kyle didn’t realize that THAT day, was also my grandmother’s birthday. It was like my beautiful angel, the one I call mom, was giving us her blessing… So, Kyle and I like to celebrate June 15th as a couple…Still and forever crazy in love…It’s #OurDay What’s your #OurDay ? Share it today with @ZalesJewelers #Ad

After thinking it over, Pickler revealed that her husband’s ability to fall asleep right away drives her crazy because she has terrible insomnia. The country singer goes on to explain that she’s up all hours of the night and gets extremely jealous when she hears him snoring, revealing to DeGeneres that she sometimes wakes him up.

“Oh absolutely!” says Pickler. “I don’t know if this is television appropriate but like I’ve literally like threatened, I don’t know if I should say this. Never mind.”

The country singer then says she’s not going to say it because it probably won’t make the edit. After some coaxing, the talkshow host convinces Pickler to tell her threat because if it’s that bad it won’t be aired.

“If you don’t quit snoring I’m going to put a tampon in your nose,” she said before asking a speechless DeGeneres, “Is that bad?”

DeGeneres is left completely speechless by Pickler, taking a moment to gather herself before saying that the entire story will definitely be aired.

You can watch the hilarious interview below.