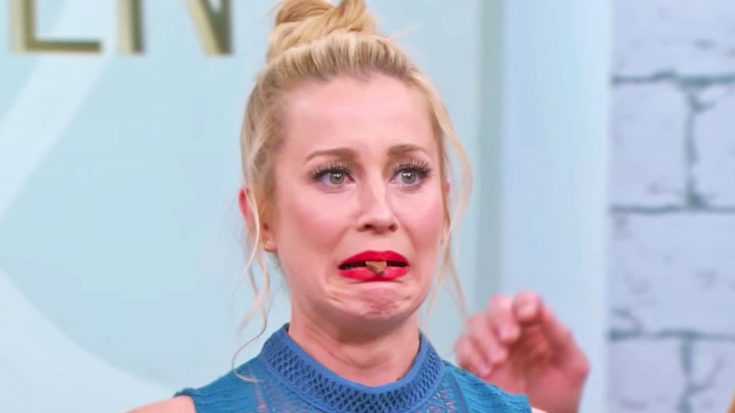 In the short time that Kellie Pickler‘s talk show Pickler & Ben was on the air, we had the chance to watch her try a whole host of new things. She participated in goat yoga, took part in a hallway dance-off, and even faced one of her biggest fears by meeting a tarantula!

As you would guess from the latter of those three things, Pickler isn’t exactly the biggest fan of creepy-crawly critters. So you can bet that some hilarity ensued when she had to deal with an insect encounter on a one episode of the show!

In this particular segment, Pickler and her co-host Ben Aaron decided to see what the insect-eating trend is all about. The two were joined by some audience members who were all going to try a chocolate-covered cricket. Aaron ate his cricket without incident, but Pickler was much more hesitant.

Because of Pickler’s reluctance, Aaron took it upon himself to try and feed her the cricket. That didn’t go over well, as Pickler shied away from him when he got the cricket close to her face.

Pickler tried as hard as she could to be brave, but she was having a difficult time. Finally, Aaron surprised Pickler by shoving the cricket into her mouth while she was looking away from him.

Upon the realization that she was about to eat a chocolate-covered cricket, Pickler made a series of silly faces that had the studio audience cracking up. She let the cricket rest on her tongue for the longest time, all while Aaron was encouraging her to “chew, chew chew!”

But as much as she wanted to, Pickler just couldn’t bring herself to bite down on the cricket. After seconds of struggling, she finally turned around and spit it out behind her. She had the biggest smile on her face once she was facing the camera again!

Tune in below to watch Pickler’s failed attempt to try eating a chocolate-covered cricket. Would you react the same way in that situation, or would you chow down? Let us know in the comments!