By Jennifer Pernicano on January 31, 2018
Advertisement 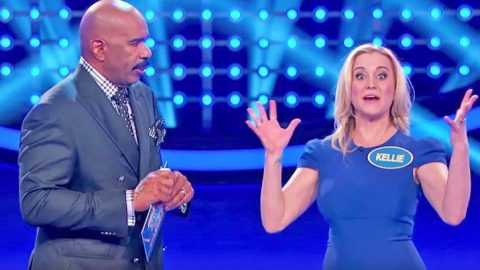 The world first fell in love with the hilarious and humble spirit that is Kellie Pickler following her emotionally-charged audition on Season 5 of American Idol back in 2006.

While the North Carolina-native only placed sixth on the singing series, she has managed to remain in the spotlight through her quirky antics and insane vocals.

Following her and her husband’s, Kyle Jacobs, appearance on Steve Harvey‘s talk show while promoting their reality show, I Love Kellie Pickler, the host invited the Pickler clan to compete on Celebrity Family Feud.

The country singer and her family went toe to toe with NSYNC’s Lance Bass and his family in one of the funniest episodes of the show ever.

While Pickler had a few missteps in her journey on the show (missing the buzzer in the opening sequence of the show), their family went on the take down the Bass family, earning the chance to play “Fast Money” for the ultimate prize of $25,000.

Check out her hilarious buzzer moment below.

#KelliePickler faces off against NSync's #LanceBass on Celebrity Family Feud! You won't believe what happens next! Watch #CelebrityFamilyFeud all summer on ABC, SUNDAYS AT 8/7c! #FamilyFeud #SteveHarvey

The country singer went up second, the first family member earning 137 of the needed 200 points. While the quirky blonde ended up getting the total over 200 to be donated to the USO, she couldn’t seem to stop herself from talking!