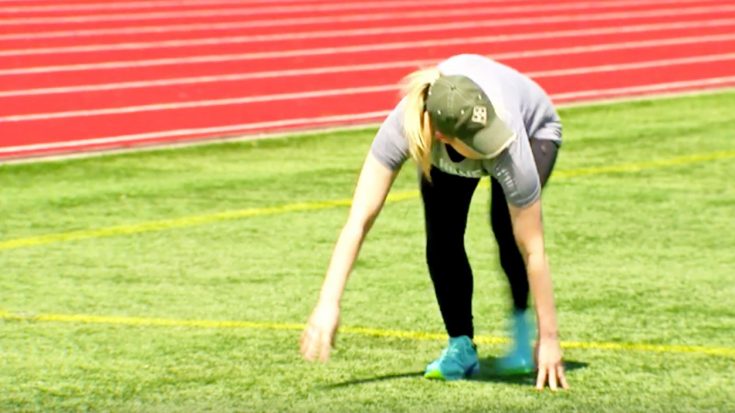 First winning the judges over with her stunning voice on Season 5 of American Idol, Kellie Pickler went on the capture the hearts with her refreshingly humble spirit. Since competing on Idol, Pickler has managed to stay in the spotlight, her quirky antics even landing her own reality series on CMT, I Love Kellie Pickler.

The hilarious reality show follows Pickler and her husband, critically acclaimed songwriter Kyle Jacobs, as they take on life in the spotlight. In one particular episode of the show, Pickler competes in Nashville’s Rock ‘n’ Roll Marathon, enlisting her friend Allison to whip her into shape.

The 31-year-old country singer and her crew hit the track to train for the marathon, Pickler struggling to make it through her friend’s intense workout. Allison took her role as Pickler’s trainer very seriously, hounding a struggling singer throughout the workout she later reveals as just the warm up to Pickler’s dismay.

“Huh?!” said an exhausted Pickler when Allison said to take another lap. “I don’t know about that!”

In addition to her reality show, it was recently announced Pickler would be the host of a new talkshow, Pickler & Ben, alongside TV personality Ben Aaron. The Faith HIll produced talkshow is set to premiere Sept. 18 according to Rolling Stone.

You can watch the hilarious clip below!

Kellie and crew are running in the Rock 'n' Roll Marathon Series TONIGHT on #ILoveKP! Sneak their training…

Posted by I Love Kellie Pickler on Thursday, August 31, 2017