Kellie Pickler Gushes About The Moment She Fell In Love With Her Husband, Kyle Jacobs 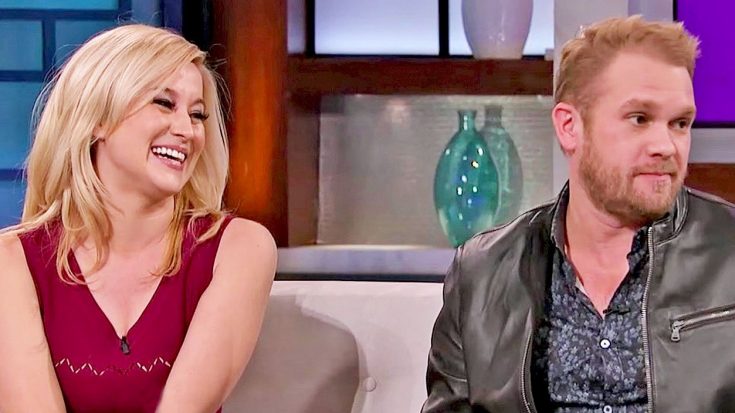 Anyone who has watched the reality show I Love Kellie Pickler can tell that she and her songwriter husband Kyle Jacobs are a match made in heaven. The two of them share the same sense of humor, and are always making each other laugh. After being married for six years, their love is stronger than ever. But their love story extends back several years more…

The couple adorably described their first meeting in a 2015 interview with The Real. As it turns out, they met in the same place that many couples do…a bar!

“I kinda came up to you didn’t I?” Pickler said, prompting a sly shrug from Jacobs. She then went on to explain the circumstances of their first meeting, saying that it was love at first sight:

“Well, what had happened was, I was out with a friend of ours. We had mutual friends, Chris and Amy, great songwriters in Nashville, they’re married. And I look across the room and I see this guy, Kyle. I didn’t know who he was or what he did. We just locked eyes and I went, ‘I’ve got to know everything about this person.'”

Pickler’s friends ended up introducing her to Jacobs, much to her delight. They got so engrossed in conversation that Jacobs said it was like “the whole bar disappeared.“

The two of them started writing songs together the following day. Their relationship eventually turned romantic, and they dated for two and a half years before Jacobs popped the question on June 15, 2010.

There was a specific reason that Jacobs picked that date to propose. June 15 was the birthday of Pickler’s late grandmother, which had previously been a day of sadness for her. Jacobs turned that day into a happy one when he popped the question, with Pickler telling People, “We both feel like we got my grandmother’s blessing.”

The couple eloped to the Caribbean for their wedding, and were married on January 1, 2011. They had originally planned a large wedding in Nashville, but eventually changed their minds. As Pickler explained in a behind-the-scenes interview while she was on Dancing with the Stars, she just looked at Jacobs one day and said “Baby, this ain’t us.“

Pickler and Jacobs are living proof that it’s not the wedding that makes the marriage, but the love that you share. Tune in to the video below to listen to how their incredible love story got its start!

Wishing these two many more years of happiness together.