By Miranda Raye on March 17, 2016
Advertisement 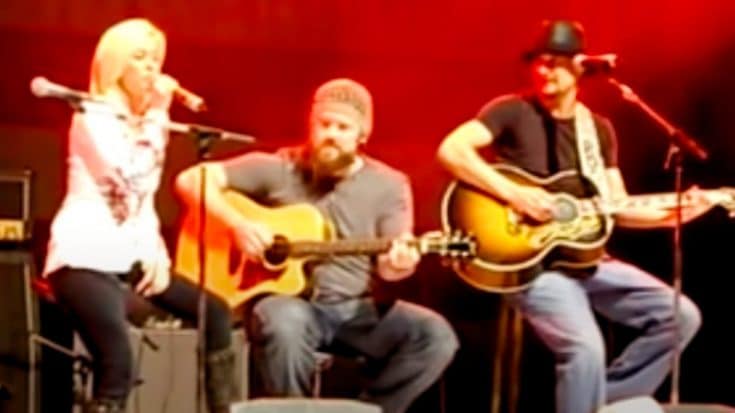 Kid Rock has experimented in countless genres throughout his career and has achieved success in every one.

But out of all of his hit songs, his country rock single “Picture” remains one of the most memorable.

Sheryl Crow served as Rock’s duet partner when the song was originally recorded. But due to a dispute with Crow’s label, Rock had to record the song over again, and chose country star Allison Moorer to sing along with him.

Although the version with Moorer was the one intended for radio airplay, some stations still played Crow’s version of the song.

Since Rock had to be versatile when it came to choosing a duet partner for “Picture,” it has allowed him the freedom to perform the song with basically any female country singer you could think of.

Over the years he has teamed up with artists such as Miranda Lambert, Martina McBride, and Gretchen Wilson to deliver crowd-pleasing performances of the hit song.

During a performance at Ramstein Air Base in Germany, Rock sang “Picture” along with the incredibly talented Kellie Pickler as his duet partner and Zac Brown of the Zac Brown Band on guitar.

Other than the sounds of Brown and Rock’s guitars, there are no other instrumentals in the performance. As a result, the vocal parts get the chance to stand out and shine. Pickler’s sweet voice brings a whole new level of innocence to the song, and serves as a beautiful contrast to Rock’s.

Knowing how popular “Picture” was, we’re sure you’re curious to hear how it sounds with a new voice attached to it. Well you don’t have to wonder any longer, because Rock and Pickler’s performance can be found in the video below!

We love hearing different artists sing “Picture” along with Rock, because it makes it sound like a whole new song!