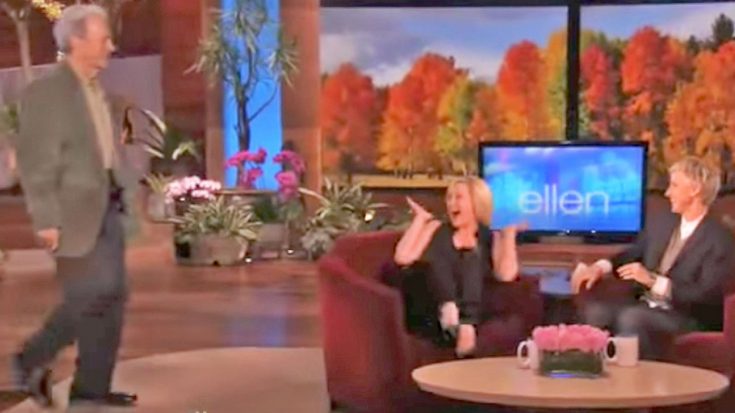 The world initially fell in love with the hilariously zany spirit that is Kellie Pickler following her emotionally-charged audition on Season 5 of American Idol.

Since her appearance on the singing competition, the country singer has been thrilling fans with her quirky antics.

Pickler appeared on the Ellen DeGeneres Show back in 2010, the talk show host apologizing to her for the miscommunication which led to her thinking Clint Eastwood – whom Pickler has openly confessed her love for since coming on the music scene – would be on the show that day. In the typical DeGeneres fashion, the talk show host revealed she had a little surprise for the country singer.

Eastwood then walked up behind a squealing Pickler, who then proceeded to run into his arms, cover his face in kisses, crawl into lap before covering her wedding ring, joking “let me hide that!”

“I don’t think you realize how much we have in common,” Pickler told Eastwood. “We both love animals and Westerns,” she said before continuing, “and my heart is pounding!”

The country singer then grabbed his hand and placed it on her chest to show him how hard her heart was beating, the audience cheering in support.

The Oscar-winning actor told the country singer she can break into his dressing room anytime.