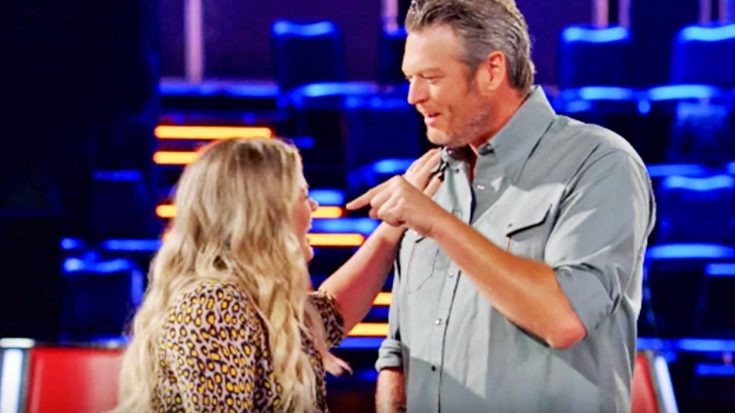 As The Voice was prepping for Season 14 to premiere, rookie coach Kelly Clarkson stopped by NBC’s Television Critics Association to do press.

Veteran coaches Adam Levine, Blake Shelton, Alicia Keys all returned to the iconic red chairs, joining Clarkson for Season 14. At the event, Entertainment Tonight wanted to know how the original American Idol was fitting in with her peers?

The 35-year-old singer told Entertainment Tonight‘s Leanne Aguilera on the red carpet, “I was so nervous and Blake was making so much fun of me because I was nervous about it!”

Thanks @blakeshelton for being there for me today @variety “Power of Women” ? I hate giving speeches and I know you don’t like to either so give it up y’all for having great friends that will be there for you!

Clarkson’s husband Brandon Blackstock manages the country singer, resulting in a longstanding friendship between the two superstar singers. However, that didn’t make the Shelton go any easier on her during each phase of the show.

“It’s different, you know, even when you’re on TV. When you watch, you hear the singer differently than you hear in a room with all that ambiance and everything. So I was nervous that I wasn’t gonna turn when I should’ve turned, or I was gonna turn and thought someone was awesome but then it was like, ‘Oh no.’ I was really nervous.”

Turns out those nerves calmed down, because she ended up winning Season 14 with Brynn Cartelli!