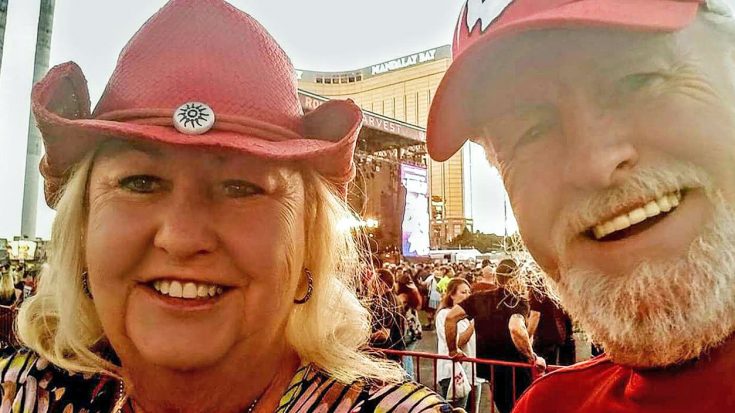 In the midst of the tragedy that unfolded in Las Vegas on Sunday (October 1), people still managed to find a few bright lights. Those bright lights were the heroes who stepped up to save others.

Many of those heroes were first responders and law enforcement officers. Many others were concertgoers themselves. Two people who fall into the latter category are Richard Hampton and his wife of 40 years, Cheryl.

Richard feels an incredibly close connection to the country music community. It is that community that inspired Richard to pursue his current profession as a Kenny Rogers impersonator in Vegas.

In addition to performing at his own shows, Richard and Cheryl enjoy attending country concerts. So when the Route 91 Harvest Festival took place in Vegas, the couple made sure they got their tickets.

Like many who attended the show, the Hamptons didn’t initially recognize the sound of the gunshots that rang out over the festival. During an interview with Esquire, Richard said that they thought someone was playing around with fireworks.

Suddenly, everything turned into chaos as people ran for their lives:

The couple managed to make it to the safety of their red minivan, which was parked in a lot across the street from where the concert took place. Just as they were getting ready to leave, the Hamptons were met by a terrified group of girls in a bachelorette party. Desperate to find a route to safety, the girls begged for the Hamptons to let them in their van.

“I kept telling the driver that I was a mom and we needed to get in the van in order to live,” Jamie Vazquez, the future sister-in-law of the bride, told KSBW 8 News.

“They were scared to death,” Richard recalled. “I told them, ‘Stay calm, girls, I’m going to get you to a safe place.’“

Just as the Hamptons were getting ready to leave again, a woman waved them down. She was screaming that her friend had been shot, and she was in desperate need of help.

As the van door opened, the bachelorette party was surprised to see that the woman who was shot was the same woman they had met the night before and had gone dancing with. Her name is Jennifer:

“She was dying,” Vazquez said. “We laid her across the seat and took off her clothes to use them to stop the blood that was pouring from her head. She was gasping for air and choking on her own blood.”

Richard said that by the time they finally left the lot, there were probably ten people crammed into the van. They dropped Jennifer off with some medics, who told Richard they’d keep her alive. At the time that Richard spoke to Esquire, Jennifer was in critical condition. Richard (man in the red shirt and white hat), looks on as medics load one of the people he rescued into an ambulance. (Photo Credit: Cheryl Hampton / Alana Joos / Facebook)

After Richard got Jennifer the help she needed, he took the girls in the bachelorette party to safety. While he says he doesn’t feel like he “saved them,” the girls believe otherwise.

“Without Richard we would have definitely died,” said Vazquez. “He is our guardian angel.”

If you’d like to help victims of the shooting, such as Jennifer, you can do so by donating to the Las Vegas Victims’ fund. All proceeds raised from this GoFundMe-verifed fundraiser will go to those affected by this horrific event.

Also, those in the Las Vegas area can help contribute to the fund by attending a Solidarity Concert at Stoney’s Rockin’ Country on Wednesday night (October 4). All proceeds raised from the event will go directly to the Las Vegas Victims’ Fund.

You can learn more about Stoney’s Solidarity Concert here.