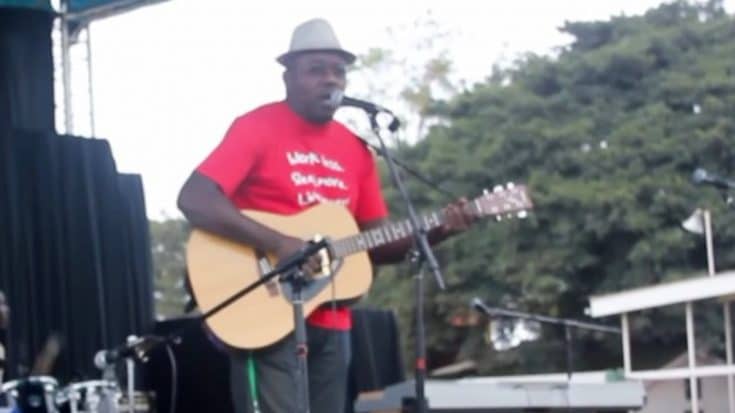 Many people are under the impression that country music is a strictly American genre. But anyone who actually follows country music knows that is not the case. There are country artists from all corners of the globe, including one talented Kenyan native.

Otis Elvis, or “Sir Elvis” as he is called, is from Nairobi, Kenya. His Facebook page declares him to be “the best country music act in Africa.” Once you hear him sing, it’s easy to see how he earned such a distinction.

During the 2012 Goat Derby, Sir Elvis stepped up on stage with his guitar and began singing a song that country fans know well…Randy Travis‘ “Forever and Ever, Amen.”

“Forever and Ever, Amen” was released in 1987 as the lead single off of Randy’s album Always & Forever. The song was a smash success, and topped the U.S. and Canadian country charts.

When you first hear Sir Elvis’s voice, you’ll swear you’re listening to a recording of Randy singing. But the voice you’re hearing is Sir Elvis himself, he just happens to sound a lot like Randy!

You’ll be blown away by Sir Elvis’ deep voice and his rich, country tone. He has one of those voices that you could listen to for hours on end and never get tired of hearing it.

Now it’s time for you to hear what all the hype is about. Check out the video below of Sir Elvis singing “Forever and Ever, Amen.” He proves that country music really is a worldwide phenomenon!