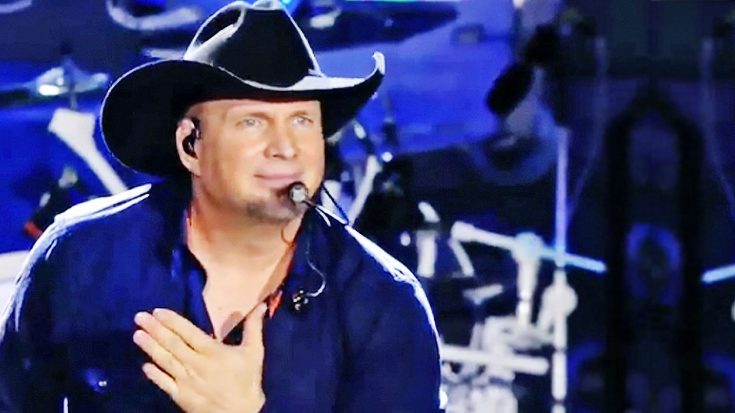 At one of his sold-out Cincinnati shows, Garth Brooks took a moment to make a shout out to a young woman currently battling cancer. Ashley Boggs Fizer says she is in “absolute shock” after the country singer interrupted himself mid-concert to lend the spotlight over to her.

“So miss Ashley, you done with chemo?” asked Brooks to which she responded “Yes.”

After Fizer shared she’s transitioning into radiation treatment, Brooks encouraged her by saying, “You kick its ass, you hear me?”

At Fizer’s request, the country singer then rolls into an acoustic performance of his song “Mom” from his 2014 album, Man Against Machine. While not shown in the video uploaded to Fizer’s Facebook, Brooks reportedly gave her his hat after he wrapped up his performance of the country ballad.

The 28-year-old woman wrote on her Facebook page that she requested Brooks play the song because her mom has been faithfully by her side throughout her entire journey and that she’s “so incredibly thankful for her.” Fizer first saw Brooks in concert 20 years ago when she was only 8 years old, making this her fourth time seeing him live.

You can watch it all unfold in the video below.

I am so deeply humbled and in absolute shock and awe that this happened last night. I have been a huge Garth fan since I saw him in concert 20 years ago at 8 years old. I am incredibly thankful to have been blessed with the opportunity to see Garth live for the 4th time, and that each time has been with my mom. This show went a little different than the others because Garth actually spoke to us, sang my song request and gave me his hat. I asked that he sing "Mom" because my mom has been right along my side in this journey and I'm so incredibly thankful for her. Radiation is scheduled to start today and this was such an amazing opportunity to celebrate the start of the next step of my treatment.