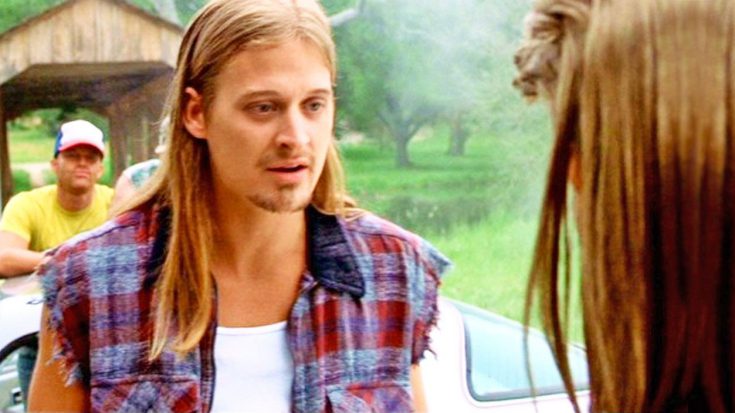 Kid Rock showed off his acting skills in the 2001 blockbuster film, Joe Dirt. The rockstar took on the role of the enemy to the most lovable redneck (played by David Spade) to ever hit the silver screens.

The story begins with Joe Dirt abandoned at 8 years old while on a family vacation at the Grand Canyon. After bouncing around foster homes throughout his life, Joe lands in a small Pacific Northwest town where he meets the town beauty queen and ultimate object of his affection, Brandy.

Joe’s strong friendship with Brandy makes him an immediate target by the town bully, Robby, played by the rockstar. Joe eventually leaves town in search of his parents, returning sometime later in order to reunite with the love of his life. However, Robby isn’t ready to go down without a fight.

“My Brandy?” says Robby after Joe shares he’s returned to town for Brandy. “Haven’t you heard? Me and her are getting married. And besides, she don’t want to see you anyways.”

Robby goes on to reveal that Brandy found Joe’s parents but instructed him not tell Joe, proving it by reading (poorly) a letter she had written to him. A heartbroken Joe flees town sparking a hysterical series of events the ultimately end with the two old flames reuniting.

You can watch the hysterical confrontation between Robby and Joe Dirt below!