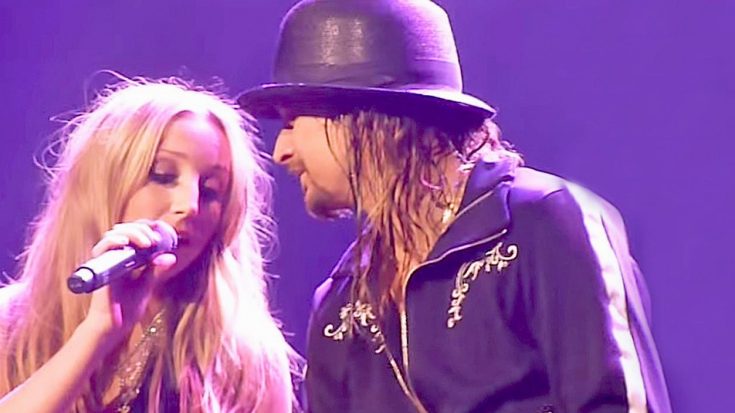 Up until 2002, no one likely dared to label Kid Rock as a country artist. But that all changed when he released a duet with Sheryl Crow called “Picture.”

“Picture” became Rock’s first country hit, and paved the way for him to continue in country music. His 2008 single “All Summer Long” went on to become the biggest country hit of his career.

Rock has since earned a spot in the country music community, and has established strong friendships with many artists. These friendships come in handy when he needs a duet partner for “Picture,” since Crow can’t always be there to sing it with him.

In the past, Rock has performed “Picture” with everyone from LeAnn Rimes to Martina McBride. During the Detroit Hoedown in 2012, Rock teamed up with not one, but three talented female country artists to perform “Picture.” Those three artists were Miranda Lambert, Ashley Monroe, and Angaleena Presley, who form the sassy trio called Pistol Annies.

Everyone loved Rock’s collaboration with the Pistol Annies so much that he decided to revisit it during a performance in Nashville the following year. This time around, only one of the Annies was able to show up, but no one in the crowd seemed to mind.

After Rock got done singing his solo portion of the song, he paused for a moment to welcome Monroe on stage. Calling her “one of the finest singers” in Nashville, Rock beamed as Monroe joined him by his side.

Rock was clearly in awe of Monroe’s voice as she sat next to him and sang “Picture” from the female narrator’s perspective. There’s no denying Rock and Monroe’s chemistry in this duet, which resulted in a steamy and passionate performance.

The crowd loved every second of Rock’s duet with Monroe, and we’re sure you will too! Check it out in the clip below.

Who else do you think Rock should sing “Picture” with? Let us know your thoughts in the comments.