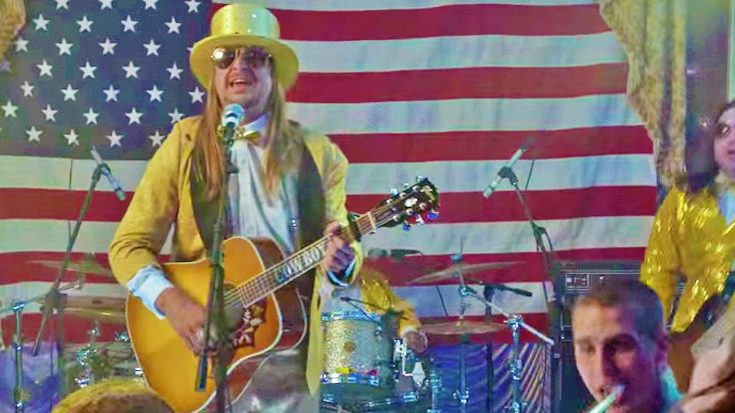 Thanks to this music video, we get a glimpse into the type of New Year’s Eve parties Kid Rock would go to. Even if they are drab, Kid Rock knows exactly how to turn the gathering into a real party!

In the music video for his song “Happy New Year,” Kid Rock and his band are getting ready for a show at a venue called Vets Hall in a run-down town. The crowd is pretty small and he can’t see anyone he finds attractive, so Kid Rock starts taking shots and chugging whiskey out of the bottle while singing the catchy song.

Eventually, the crowd starts doing the same and it livens up! People start making out, taking off their clothes and Kid Rock is in for the surprise of a lifetime.

He drinks enough onstage to make him think he is at a huge, rockin’ party with tons of people dancing to their music. He convinces himself that a pretty unattractive girl in the audience is Cindy Crawford! Kid even imagines himself as a hot, shirtless model!

“Happy New Year” was released on his 2012 album Rebel Soul.

This song is sure to get you in the mood for a fun start to the new year, and will have you singing along in no time.