Kids Reacting To Meeting Chickens Is Just The Laugh You Need 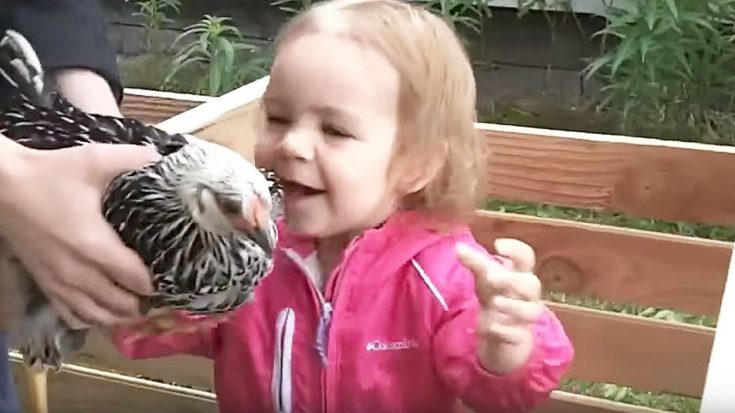 One little girl shocked viewers with her unbelievable reaction to being handed a young chicken! Sporting her pink coat and wide grin, the little girl and her brother were having the time of their lives exploring a small chicken coop and coming face to face with their feathery friends.

As the brother climbs out from beneath a wooden beam, a woman stands behind the two children holding a young, black chicken. The girl is instantly mesmerized, quickly petting the bird and before long bringing herself directly to the animals to do something downright adorable! As her brother yells “chicken”, the little girl reaches out her arms and put the bird in a gentle embrace for a loving hug!

After letting out a giggle, the little girl is once again brought another chicken where she takes the exact same steps and hugs the incredibly calm bird! As the few seconds pass, the bird jumps from her arms and continues on its way, leaving the little cutie with a broad grin and memory to last a lifetime!

The video was featured in a compilation titled “Baby meets Chicken for the first time”, a series of adorable clips showcasing young children who have both cute and hilarious encounters with farm animals! You can watch the upload below!